You are here: Home>Locations>Warwick>23 + 25 Market Place, Warwick: “A Fig for a Date Stone” 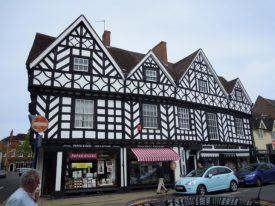 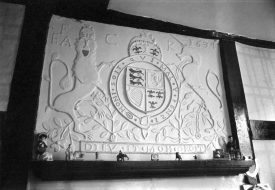 These two properties, which stand on the corner of New Street, are a single, ornate, timber-framed structure and have sometimes been known as ‘Seven Gables’ due to the number of of large gables fronting the streets, or The Beehive. They have a had variety of uses over the years. The building is said to date from 1634, due to the inscription on a plaster overmantel in one of the flats,1 but is this correct?

The inscription, as well giving the date (in the top right hand corner of the overmantel), also includes a central shield wit the initials ‘C’ and ‘R’ above it, and three other initials, in the top left corner, which say ‘F’ above ‘E’ and ‘A’.

The ‘C’ and ‘R’ stand for ‘Charles’ and ‘Rex’ (i.e. King Charles I), with the shield bearing his arms. The other initials should relate to the owner or occupier. However, the documentary evidence for the property shows it was owned by John Edmonds and occupied by Ralph Sharley at this time. So who do the initials relate to, and what is the importance of the date, since it is highly unlikely to be when the property was built as the initials are unrelated to the owners or occupiers, and a property is not normally rebuilt in the middle of a tenancy – Sharley was a carpenter who rebuilt another property in the Market Place in 1614.

Edmund Franckton, and his wife, Alice

The initials, in fact, relate to the occupiers after Ralph Sharley, who died in 1651. These were Edmund Franckton, and his wife, Alice, Edmund making his will in 1663. The date 1634 must, therefore, be when they married (the parish register for St Mary’s, Warwick does not survive for this period), and the overmantel must have been installed after they moved in, probably about 1655, as this is when Ralph Sharley is recorded as being the ‘late’ occupier.

1 Pictured in the Leamington Courier in October 1969