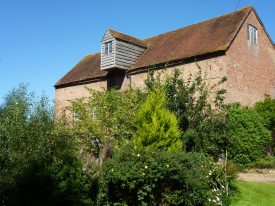 The interior of the mill.
Reproduced by kind permission of Charlecote Mill. 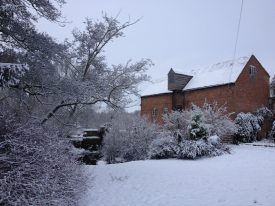 The mill as you see it was probably built in the 18th century, but on the site of earlier mills. A mill at Hampton Lucy is even mentioned in the Doomsday Book (compiled 1086). It was then valued at 6s.8d.

Little is known of the mills and their millers over the years, but a noticeable incident occurred in 1675 when the miller John Dickens and three other men were indicted for ‘the felonious stealing and carrying of two perches and two pikes of the value of 11d, of the goods and chattels of Richard Lucy Esq.’ Dickens and Robert Nason confessed, and were sentenced to be ‘stripped from the waist downwards and openly whipped through the town of Hampton Lucy till their bodies be bloody’.

The present mill building and mill house were evidently built by the Lucy estate, and are still owned by Sir Edmund Fairfax Lucy. The present mill, apparently built in 1806, is a particularly fine building, with walls 18 inches thick. The names of the millers in the 19th and early 20th centuries can be ascertained from trade directories etc.

The name of one, William Witherington, who was miller from 1845 to 1864, can be seen carved in the brickwork on the top floor. The last millers were Newbery and Son, from 1936 to the 1950s. However, they used mostly an engine-driven hammer mill, and from the time of the Second World War, the only equipment driven by waterpower was the sack hoist.

From 1978, John Bedington had a lease over the mill and he and Tom Mitchell, aided by a band of helpers too numerous to mention, have done extensive repairs to the roof, windows, floor, stairs and doors, gears, stones, sack hoist and bins and the East water wheel. The West water wheel was repaired in 1978 by the Birmingham millwright Bob Atkins at the expense of the BBC for their film of ‘The Mill on the Floss’.

Charlecote is not a museum occasionally grinding flour as many water and windmills now are. Charlecote is a piece of living working history and one of only a small handful of surviving working watermills in the UK.

Map marker in the right place? If not, please correct the map.
Locations
Charlecote (105)
Subjects
Windmills, Watermills and Cornmills (476)
Date

Linkedin
More from Windmills, Watermills and Cornmills
More from Charlecote