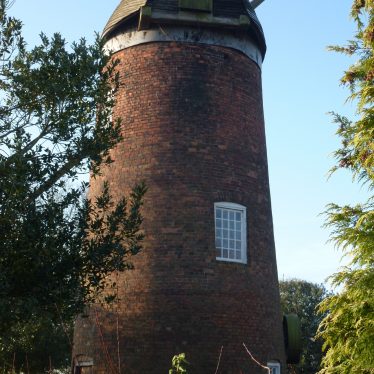 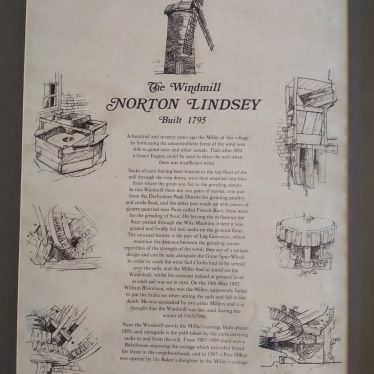 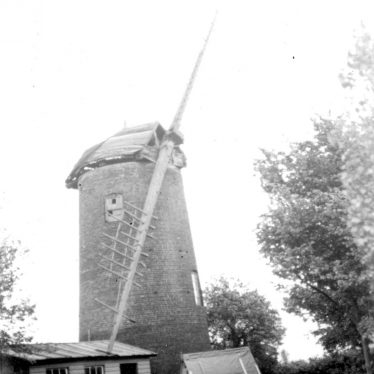 My parents bought the house in about 1969 and made extensive changes. We replaced the windows in the mill, making them ourselves, and the door. My father and I took down the garage that was next to the mill, putting the concrete base bits in a large pile by the trees. We sold the house in about 1976. I have included a photograph of an information document we used to sell to people who came round to look at the windmill. We used to get at least one or two lots of people every weekend asking to look around. We showed them round and would often sell them one of these documents.

A hundred and seventy years ago the Miller of this village, by harnessing the uncontrollable force of the wind, was able to grind corn and other cereals. Then after 1884 a steam engine could be used to drive the mill when there was insufficient wind.

Sacks of corn having been hoisted to the top floor of the mill through the trap doors, were then emptied into bins from where the grain was fed to the grinding stones. In this windmill there are two pairs of stones; one pair from the Derbyshire Peak District for grinding poultry and cattle food, and the other pair made up with pieces of quartz quarried near Paris called French Burr, these were for the grinding of the flour. On leaving the millstones the flour passed through the Wire Machine, where it was graded, and finally fell into sacks on the ground floor. The unusual feature is the pair of Lag Governors, which maintain the distance between the grinding stones regardless of the strength of the wind; they are of a unique design and can be seen alongside the Great Spur Wheel. In order to catch the wind, Sail Cloths had to be spread over the sails and the Miller had to stand on the Windshaft, while his assistant helped at ground level as each sail was set in turn. On 14th May 1892 William Blakeman, who was the Miller, apparently failed to put the brake on when setting the sails and fell to his death. He was succeeded by two other Millers, and it is thought that the Windmill was last used during the winer of 1905-1906.

Near the windmill stands the Miller’s cottage, built around 1803, and alongside is the path taken by the carts carrying sacks to and from the mill. From 1907-1909 there was a Bakehouse adjoining the cottage which provided bread for the neighbourhood, and in 1907 a Post Office was opened by the Baker’s daughter in the Miller’s cottage.