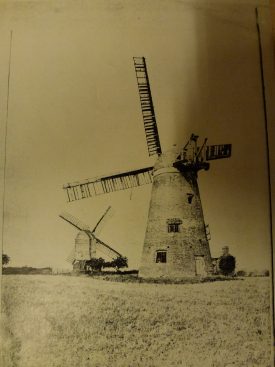 Stockton was unusual for a small community in that it had two windmills side by side during the 19th century.

Built in 1810, it had a brick and slated round house, four common sails, ladder, tailpole with lever and two pairs of stones; it ceased working in 1879.

The Rugby Advertiser showed a photo of it in poor condition (with two of the sails damaged) on 11th April 1914, and other records suggest that it was demolished in 1923.

Built in 1860. A brick tower with batter, four storeys high, cap dome, four patent sails and fantail. It ceased working in 1895 when the fantail was removed; the Rugby Advertiser reported that it was in good condition in 1911, but it too was demolished in 1923.

It was reported that the brick tower windmill was owned and worked for many years by the late Mr William Beck an old Stocktonian. William Beck came to the village in about 1798 with his parents. Dates were found in the old post mill of about 150 or 160 years ago [i.e. the mid 18th century] and the letter TS cut into the trough that carries the pair of grinding stones and also the barley trough.

Linkedin
More from Stockton
More from Windmills, Watermills and Cornmills