You are here: Home>Locations>Hartshill>The Wharves at Hartshill

The Wharves at Hartshill 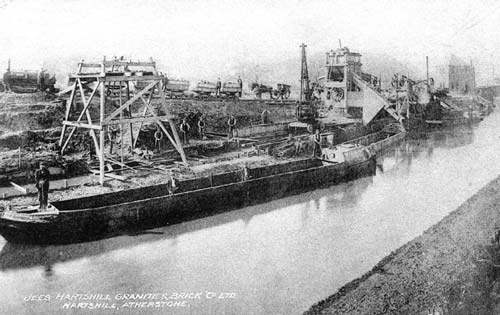 A view of canal wharves at Hartshill, north of Hartshill Quarries
Warwickshire County Council
Description of this historic site

The Wharves at Hartshill. Four canal wharfs, where vessels would have loaded and unloaded goods, were in use during the Imperial period. They are situated 500m north of Hartshill Quarries.

1 Along the canal banks in the above square are four wharves. There is one to each side of the Nuneaton Road bridge (SP 33 94), and one to each side of a bridge at SP 33 94.
2 This bridge, marked as a footbridge on later maps, is shown as carrying a tramway on the 1924 OS 25″. This tramway serves the various wharves, carrying (presumably) stone from Hartshill quarries.
3 The wharf to the S of the bridge would appear to have been used well into this century, being well served with brick and concrete buildings. None of the other wharves were accessible or visible.