You are here: Home>Locations>Salford Priors>Site of Undated Settlement 1km south west of Rushford 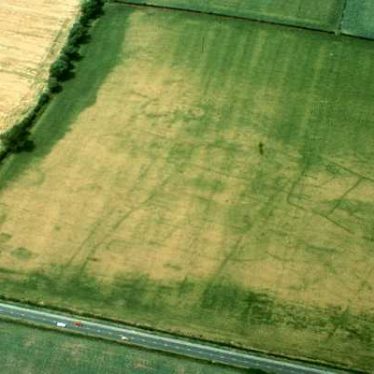 The site of settlement which is visible as a cropmarks on aerial photographs. It includes enclosures, ring ditches and linear features which have been interpreted as possible boundary ditches. The date of the settlement is unknown but it is likely to span from the Bronze Age to possibly the Roman period. It is situated 1km south west of Rushington.

2 Undated settlement site, consisting of penannular gullies, enclosures and linear features, shows on air photographs. On morphological grounds the site is probably of Iron Age and Roman date.
2 At least three ring ditches show on air photographs.
3 Site no 47 in survey.
4 A group of rectilinear enclosures, tracks, boundary ditches and possible ring ditches mapped as part of the English Heritage National Mapping Project (L. Chadd). The source for this has still to be identified.
5 A number of features are clear on satellite imagery from Google in 1999.