You are here: Home>Locations>Warwick>Site of Post Medieval Mansion at Priory Park 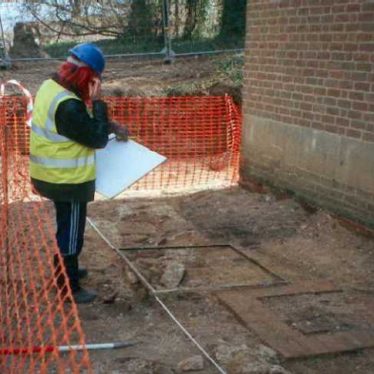 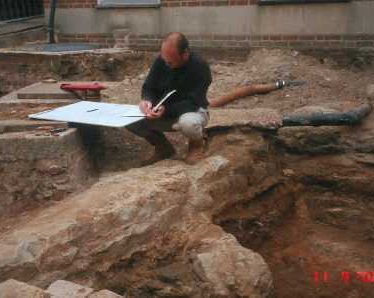 The excavation of a Post Medieval house in Priory Park, Warwick
Warwickshire County Council
Description of this historic site

The remains of The Priory, a Post Medieval house located in Priory Park. Information about the building has been retrieved from excavation, documents and the remains of the building left in the park. Much of it was dismantled and taken to America to be re-erected in 1925.

3 Scheduled as Warwickshire Monument No 172.
4 The Priory (PRN 1958) came after the Dissolution into the hands of Thomas Hawkins, who demolished the greater part of the Priory and utilised the materials for the construction of a mansion completed in 1556. In 1925 the shell of this house was removed to Richmond, Virginia, for re-erection; the only remains now are a fragment of the ground floor with a mullioned and transomed window and part of an 18th century addition.
5 Scheduling information.
6 Archaeological evaluation report. The trenches revealed part of the wall of the north range and other garden and outbuilding features.
7 Recording of the runined South wall of the North range of the post-monastic mansion house was carried out by N. Palmer. The range which dates to the mid-to late 16th century, was brick built with stone details indicating several phases of alteration. The North range was mostly demolished in 1925, along with the greater part of the house. The 18th century pavillion survivied to the 1970s, when the existing CRO was built. (Awaiting final report therefore event not mapped – A. Hatcher)
8 Revision of the SAM.
9 Further report on work carried out in December 2005, under 7. Contains further architectural details recorded.
10 A rubble layer was recorded below the topsoil during monitoring of a new fence being installed around the County Record Office, probably deriving from the 1925 demolition of the 18th-century wing of the manor house.
11 Detailed information on the development of the house, from Thomas Hawkins up until its relocation to Virginia.