You are here: Home>Locations>Stratford-upon-Avon>Site of Possible Moat 400m E of Church 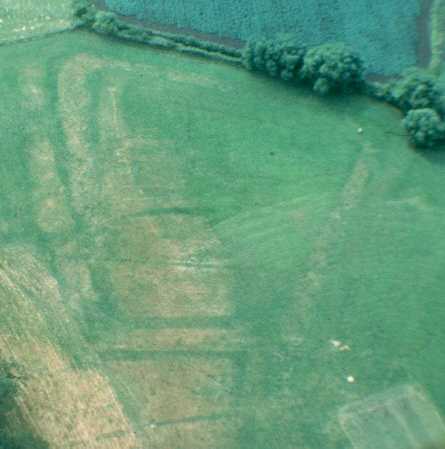 The site of a moat, visible as a cropmark at Stratford upon Avon
Warwickshire County Council
Description of this historic site

The site of a moat, a wide ditch usually surrounding a building. Aerial photographs and excavation prior to earth tipping suggested a Medieval date. It was situated at the south east end of the Recreation Ground at Stratford on Avon.

1 Earthworks indicative of a moated site appear on air photographs. 1968: The area has been completely flattened and no remains were seen. Examination of aerial photographs suggests this to have been a flanked redoubt of the Civil War, but this cannot be right (see reference 2).
2 The site is called ‘Hopyard’. An excavation was conducted in 1965 in advance of earth tipping. At this point is a clearly visible enclosure, c91m by 60m, surrounded by a broad moat and bank. The relationship between this moated site and adjacent ridge and furrow suggests a Medieval date. The site is marked on a map of 1599 and is marked as an osier bed and called the ‘Hopyard’. The enclosure was sectioned on the E side and a trench dug into the interior to look for buildings. The moat was 1.2m deep and 10.7m wide. A bank was 0.9m high and at least 6m wide. The trench in the interior revealed no structures and only a few sherds of 13th-14th century pottery. These do no more than suggest a Medieval date. This could still represent a manor house.
3 Various air photographs.
4 Plan of the earthworks.
5 Mentioned. Treswell’s map of the manor, drawn in 1599, shows what appears to be a substantial moated site on the meadows of the Avon, opposite Stratford itself. Trial excavations in 1965 recorded that the ‘moat’ was clean, and no occupational evidence was found in the centre of the island. It might therefore have been a series of ditches for osier growing rather than a manor house.
6 Cropmarks of this feature, seemingly larger than a single ‘moat’ show on Google Earth 2007 and 2008 air photos.