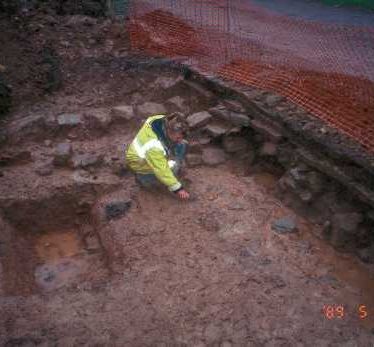 A moat, a wide ditch surrounding a building. The moat is medieval in date and is visible as an earthwork. It is situated north of McDonnell Drive, Bedworth.

1 The remains of a small homestead moat in poor condition.
2 The N and E sides remain. The moat is rectilinear and waterfilled. It appears to be in a good condition. The house and moat do not appear on 17th century maps.
3 Reference 2 suggests that the moat is contemporary with the house, but the grounds for this suggestion are uncertain.
4 Evaluation revealed substantial walls and the backfilled southern arm of the moat. Medieval glazed tiles and pottery were recovered.
5 Desk-based assessment carried out in advance of development.
6 Evaluation carried out in advance of development. Sandstone blocks and rubble spread appeared to represent the remains of revetting against the inner lip of the moat. Walls, probably of medieval date, appear to have been part of a substantial building located on the eastern side of the moat platform. Environmental samples were also taken from the base of the moat.
7 Newspaper article on the ongoing excavations, reported in 6.