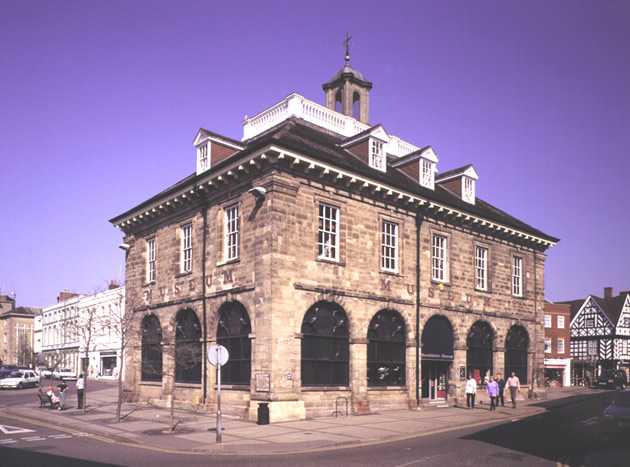 Warwick Market Hall was built of sandstone in the 17th century. Areas were rented to tradesmen, and there was a small prison on the ground floor. Markets were held here until 1905, after which the whole building became a museum. It is located in Market Place.

1 1670: A committee was set up to bargain for stone to erect a Market House. It was built on stone pillars and from 1700 parts were rented to tradesmen. In the centre of the ground floor was a small prison where, until 1848, prisoners were kept. In 1840 the Warwickshire Natural History and Archaeological Society acquired the use of the upper rooms. About 1880 the arches were filled in with glass but markets continued to be held underneath until 1905. Thereforward the whole building was used as a museum. The hall is of local sandstone ashlar, three bays long and five bays wide.
2 1670 by William Hurlbutt. Free-standing. Two storeys with hipped roof. Cupola and balustrade were rebuilt in 1965.
5 The Market Hall was de-scheduled in 1993.
6 Text for the Borough Guide.
7 Drawing of cupola.
8 Information sheet about work on the Market Hall in 1965.
9 Investigations in the attic of Market Hall revealed an apparently original fireplace on the southeast side of the central stack. The fireplace had been blocked with early mid-19th century brickwork. With two or three fireplaces on the first floor, this would make a total of three or four in the building, although Hearth Tax was paid only for one in 1674. It is possible, however, that the extra tax was paid by tenants.
10The investigation revealed the morphology of the building since its first apperant use in the 11th century using archaeological and historical evidence