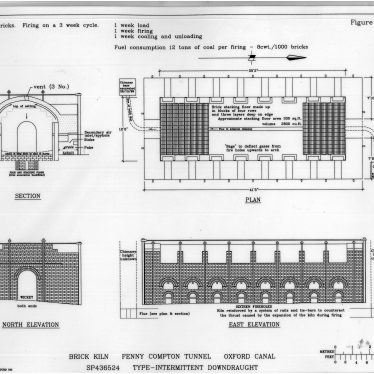 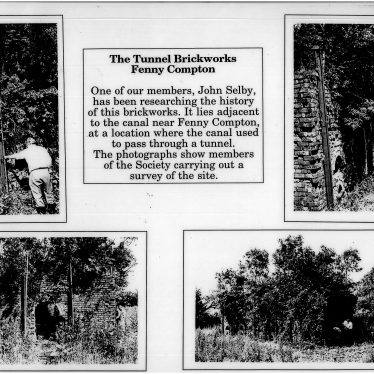 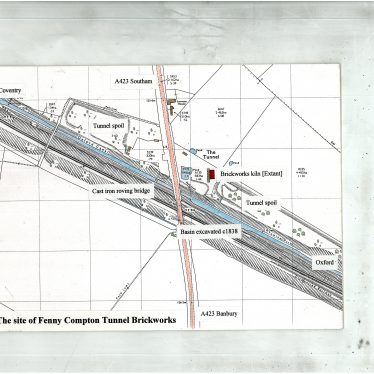 Documentary evidence suggests that this the site of a kiln used for making bricks during the Imperial period. The site is east of the tunnel, 1.8km east of Fenny Compton.

1 19th century brick kiln adjacent to the canal. Warwickshire Industrial Archaeology Society have carried out extensive documentary research.
2 A brickyard was built here to exploit the clay produced by the building of the Fenny Compton Tunnel (PRN4371). A kiln was built in 1840-1 and continued production until 1917. The remains of the kiln are extant.
3 Images received from WIAS, via John Brace.
4 One of several places where the Oxford Canal Company manufactured bricks, pipes etc. for both their own use and for sale to others. This works is special for it reused the clay spoil from the adjacent cutting. The first record of brick making here is from 1829 with the present Kiln dating from 1841. By 1915 the clay spoil from the cutting was almost exhausted and the works closed soon after. It apparently re opened as the Tunnel Brick and Tile Works some time later but very little is known of this venture. The principal remaining feature is the Intermittent Downdraft Kiln (13x6x3½m high) which was cleaned and recorded by the Warwickshire Industrial Archaeology Society in the decade from 1990. Also to be found is an incline leading to the canal towpath and worked by a small hand winch. Presently (2013) an attempt is being made, by the ‘Fenny Compton Kiln Preservation Trust’, to restore/preserve the kiln.