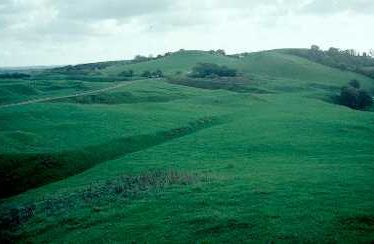 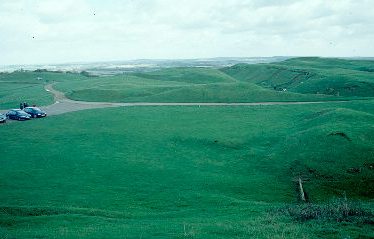 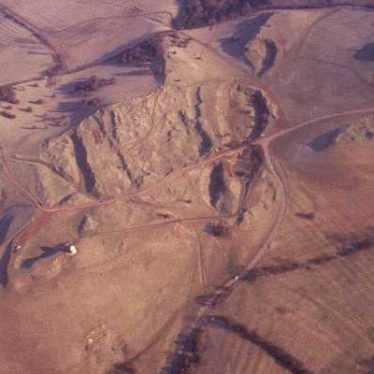 The site of ironstone workings and a mineral railway at Burton Dassett Hills. Extraction was for both the stone and the iron ore. Extraction began around 1868 and continued intermittently until the 1920s.

1 2 The ironstone quarry at Burton Dassett is shown on the first and second edition Ordnance Survey maps of 1886.
3 At Burton Dassett the hills were quarried for ironstone. The extraction was both for the stone and the iron ore by the Burton Hill Iron Ore Co; the Burton Dassett Iron Stone Co from 1895; Willington Iron Co from 1907; T. & I. Bradley & Sons from 1918. 1868 is probably when the quarry operations first started, when the output would probably have been conveyed by horse and cart to the nearest station at Fenny Compton. Around 1873 a light ropeway was constructed to transport the material to the Burton Dassett goods yard (actually located at Northend). A series of short pylons supported the ropeway which carried small round buckets, haulage being supplied by a portable steam engine at the lower end. By 1885 the ropeway had been dismantled. In c. 1895 a railway was constructed to link the quarry with the East and West Midlands Junction Railway. The operating period for the quarry throughout it’s history has been intermittent. The final reopening of the quarry was during World War I when there was increased demand for iron ore, the reopening occurred in 1918 and had ceased operating by c. 1921.
4 – 10The earthwork remains of the railway that was constructed in the late 19th – early 20th century are still visible on the ground and in aerial photographs.
11 The only workable ironstone in Warwickshire is the Marlstone Rock Formation in the south of the county. It was dug briefly for iron ore on the Burton Dassett Hills in the 19th century but has been
mainly used as a source of building stone, ornamental stone and aggregate (Dr Jon Radley, pers. comm.).
12 A brief review of the history of the ironstone workings. Eric Tonks suggests that the quarries were working by the early 1870s. Thereafter, a reopening took place in November 1898. for which Wm. Glover & Sons Ltd of Warwick installed a steam powered aerial ropeway to Burton Dassett Platform on the Stanford and Midland Junction Railway (Northend). Tonks states the tramway quarries were operated by pony and gravity but also gives anecdotal evidence of a steam locomotive being used for a short while.