You are here: Home>Locations>Coleshill>Coleshill Hall 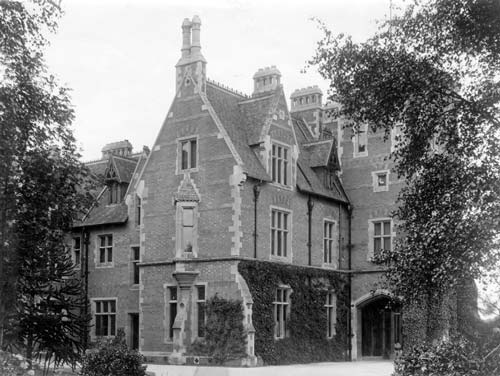 1 A manor house may have been located within the moat – see MWA289.
2 “Coleshill Hall Farm, on the north side of the Birmingham Road ¾ mile south-west of the church, is an 18th-century brick house, but on the south side of the road is a 17th-century timber-framed barn and other farm-buildings. North-east of the house are the remains of a dry moat with no structures inside it.

”
3 The barn is now derelict, but the house is in good condition.
4 Note.
5 The 17th century stable block/farmhouse – Coleshill Hall Farm – is listed. (MWA12715)
6The farmer, Mr Lucas, said that his father was told as a lad that the old Hall on the site was destroyed by fire last century, and that the present farmhouse at SP 19078825 was orginally the stable-block to the house (MWA12715). The standing Coleshill Hall (MWA12714) at SP 185893 (now in use as a hospital) was built in 1873. The Digby family who acquired the Manor in 1495 were subsequently ennobled, later also becoming Earls of Bristol (1). This together with author’s evidence for the existence of a Loggia at Coleshill Park in the 17th century, plus the documented existence of a deer park (SP 18 NE 4), should imply that the old Hall and its grounds were the subject of architectural treatment of some pretension.