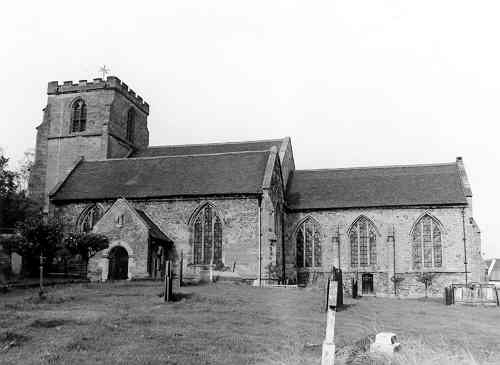 The Parish Church of St. Peter which has its origins in the Medieval period. It is situated on Mancetter Road, Mancetter.

1 Chancel, nave and aisles, S porch, and W tower with modern vestry to N. Of 12th century origin. The chancel is 13th century. Nave generally 15th century, with 14th century N wall and 13th century N arcade. 15th century embattled tower. Early 17th century porch of brick. The church has stained glass from Merevale Abbey and Winchester College Chapel, and later monuments.
2 The first reference to the church is in 1196.
3 Evidence of a substantial 13th century church on the site is the enormously tall lancet window in the nave W wall which is now hidden by the tower.
4 OS card.
5 Photograph.
6 Church guide.
7 Detailed decription of church.
8 Correspondence about carvings of a gallows and an axe on the outside of the tower.
9 Observations in 1997 noted a single grave, together with a deposit of 3kg of 18th century pot. The NGR for both is given as SP3296, but they were not associated.
10 Note giving the grid references for the two separate observations in 9.
11 Letter from 1997.

Linkedin
More from Mancetter
More from Chapels and Churches