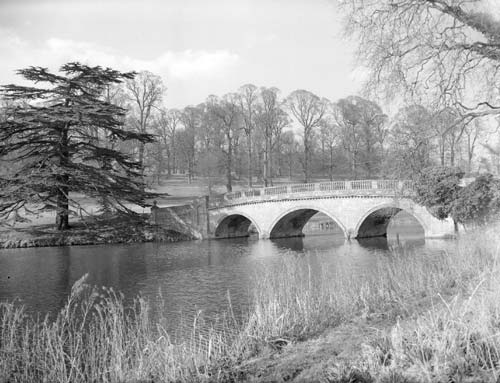 1 A stone bridge which carries the drive over Compton Pool. Stone bridge of three arches with 19th century balustraded parapet. Possibly by Adam.
2 The bridge is little used today; the drive is no longer in use for vehicles and the bridge is only used as a footbridge. Although intact the bridge does not appear to be entirely structurally sound.
3 The excavation of two trial holes on Compton Verney Park Bridge revealed the original rubble infill of the bridge but no early carriageway surfaces survived. There was also evidence that the parapets may have been replaced.
4 Three arched bridge for drive over Compton Pools, planned and executed by Capability Brown, possibly to Adam’s design 1770-72. One of a contemporary pair.
5 Early undated scheduling record.
6 Letter about sphinxes on the bridge.
7 Further letter concerning the shinxes. A drawing dated 1953 in The Birmingham Post shows the phinxes still in situ.

Linkedin
More from Compton Verney
More from Bridges and Viaducts