You are here: Home>Locations>Shustoke>Blythe Mill 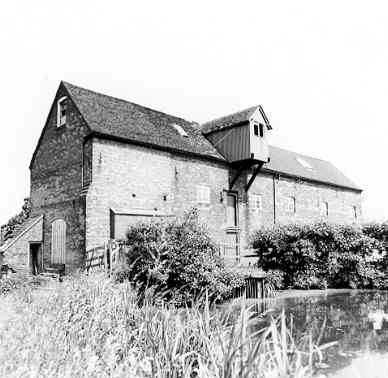 Blyth Mill, a watermill which was built during the Post Medieval period, and which remained in use until the Modern period. The mill building is from the Imperial period with later additions. It is situated 700m north of Blyth Hall.

1 Two water mills were ‘conveyed’ to William Blythe in 1587 and this mill appears to have been part of Blythe Hall estate ever since. Information on ownership exists for the 19th century and 20th century and the building was in use until the 1970s. It is now in use as a store. The mill building is a three storey brick structure with a large lucam. A datestone on the central section reads ‘1754 R & G’. Additions were made in the mid 19th century, notably the full height wheelhouse. The internal undershot wheel, 5.9m in diam, was installed in 1861 by Robert Summers of Tanworth in Arden and much of the machinery remains. In the early 1960s the River Cole was diverted and it became impossible to operate the machinery. Electrical motors were installed.
2 Photographed in 1977.

email
More from Shustoke
More from Windmills, Watermills and Cornmills