You are here: Home>Locations>Warwickshire unspecified or out of county>Rockin' and Rollin', 60 years of Warwickshire Association Youth Clubs: Part One 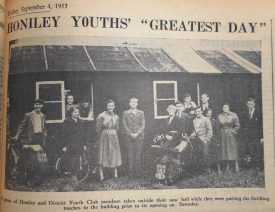 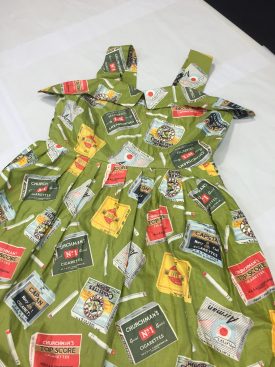 Sundress handmade by the donor’s aunt who worked at the department store 'Francis' in Leamington Spa, Warwickshire, c.1950s.
Warwickshire Museums. 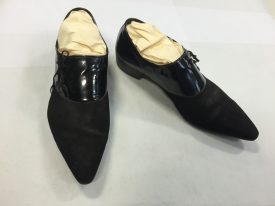 Men’s shoes with side lace fastening, in the style of winkle pickers popular in the 1950s.
Warwickshire Museums.

We have a Technicolor image of post-war 50s, but whilst America experienced fast-rising rates of prosperity and living standards, early 1950s Britain was a very different place. Many towns were still recovering from war damage. Rationing continued until 1954 and there were problems with poverty, housing and low life expectancy.

However, things were also changing rapidly. A whole generation of young people came of age in the 1950s. They had disposable income for the first time. After years of hardship with rationing and reconstruction, people were hungry for something different and more colourful.

An affluent and booming America was also exporting its popular culture to these shores. For the first time music and movies represented young people and the things they enjoyed doing. Fashion and food also followed suit, opening up new markets to a new type of young consumer with spare cash and spare time. In the United States and here in UK, in their jeans and with fashionable new hairstyles, here came the first teenagers!

Warwickshire Association of Youth Clubs (WAYC) reflects this trend. Founded in 1954, it aimed to support youth clubs all around Coventry, Warwickshire and Solihull (the old Warwickshire county area). The clubs gave young people a place to meet friends, hang out and have fun, as well as somewhere to find support and opportunities. By 1956, 50 clubs were affiliated to the organisation, which specialised in offering advice, training for leaders and members, promoting all their activities, table tennis, dancing and drama.

WAYC continues its work today, still based in Leamington Spa and working directly with over 580 young people every year and indirectly with over 12,900 young people and over 1,715 youth workers through their 145 affiliated youth groups. The Rocking and Rolling project has worked with Youth Clubs across Warwickshire, Coventry and Solihull and involved young people stepping back in time to discover what life was like for teenagers 60 years ago.

When we think of fashion in the 1950s, we may well be thinking of glamourous vintage dresses, and James Dean-influenced teens in jeans and leather jackets. In post-war Britain, things were a little different. Though clothing rationing ended in 1949, it took much longer for the textile and fashion industries to recover and for British fashion to become more than just utilitarian.

However, change was in the air. Dior had a ground breaking ‘New Look’ and across Europe a new style was taking hold. Those who could afford to could now dress elegantly. Many other women would be inspired by these new styles and make their own dresses with patterns. New man-made materials offered convenience and ease of wearing and washing like never before.

With the rise of the teenager, teen tribes developed fashions that showed everyone who they were. They were making a statement with their clothes! By 1956, 80% of teenagers had jobs, and most were earning more than their pre-war counterparts. With no commitments, they had disposable income they could spend. Being able to choose and buy your own clothes was a statement of independence. This was fuelled by a new fashion market.

Part two looks at more changes, in music and food.