You are here: Home>Locations>Studley>An Unfortunate Apprentice in Studley

An Unfortunate Apprentice in Studley 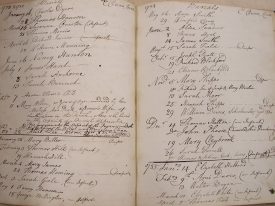 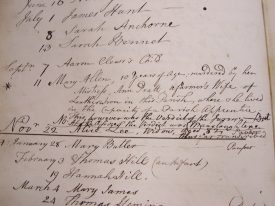 Close-up of the entry for Mary Allen in the register.
Warwickshire County Record Office reference DR536/2

Mary Allen, 10 years of age; murdered by her Mistress, Ann Pratt, a farmer’s wife of Leather-Iron in this parish, [Studley] where she lived in the capacity of a parish apprentice.

This however was the verdict of the jurors. NB. But at the Assizes the Verdict was Manslaughter.

Unfortunately there does not appear to be a record of the sentence Ann Pratt received for her offence. The Constables accounts for Studley1 on the 11th/12th September include the expense of taking ‘Richard Pratt’s wife’ to prison. The Constables also include expenses for a summons to jury on ‘account of Robert Allins daughter’.

The Coventry Mercury from Monday 29th September 1783 recounting Mrs Pratt’s transportation to Warwick Gaol suggests that Mary Allen’s death ‘was cruelly effected by beating and Starving her.’2 As Ann Pratt was found guilty of manslaughter only it is likely that the Assize court considered the death unintentional and the likely sentence for such a crime was transportation.

An apprentice can be defined as “a young person bound by indenture to a tradesman or artificer, who upon certain covenants is to teach him his mystery or trade”. A written contract or deed was required, however despite some survival of indentures from Studley none for Mary Allen was found.

Whilst traditionally apprenticeship provided a young person with training in a trade and skills for life, Pauper apprentices very often did not receive these opportunities. Children of poor families were apprenticed to reduce the cost of the family on the parish; sometimes the threat of complete withdrawal of aid forced parents to consent. Children were also forcibly apprenticed to unwilling individuals via a ballot and the threat of fines.

These apprenticeships would also often take place across parish boundaries. This was because the apprentice took on the settlement of their Master’s parish. As a result they would not be chargeable to their original parish if they later required assistance through rates.

Overseers of the Poor were criticised for saving expense, by putting children out to masters who had little regard for the child’s education and welfare, and were only interested in the monetary reward for accepting an apprentices. Unwilling masters may have been cruel and neglectful, or too vigorous in disciplining apprentices they saw as nothing else but a burden.

Corporal punishment was permissible under English law in the 18th century; subordinates such as women, children and servants could be physically punished for disobedience or in order to correct their errors. As a master acted in loco parentis, they were able to ‘moderately’ correct their apprentice as a parent would; however in some cases physical violence became extreme.

Cases of cruelty unfortunately can be found throughout the country and into the 19th century, often attracting attention from the popular press. Ballads, broadsheets and pamphlets attest to the popularity of such cases.

This article was the November 2012 Document of the Month for Warwickshire County Record Office. Further articles can be found on their website.

Map marker in the right place? If not, please correct the map.
Locations
Studley (166)
Subjects
Crime and Civil Disorder (95)
Date

email
More from Studley
More from Crime and Civil Disorder