Millicent Farley and a Fillongley Mystery 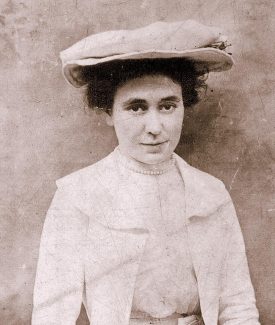 Millicent Farley (born Bonner Breeze) c.1910. One studio portrait of her as a young woman was deemed sufficiently flattering not to be burned.
Photograph courtesy of Alyson Breuer 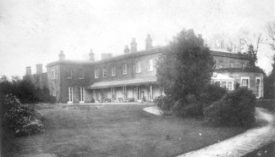 Living in Chicago, I am a long way from my family’s roots, but my quest to find out about their past leads me to Warwickshire, and a search for any records relating to the household staff employed by the Henry Alden Adderley (Lord Norton) family at Fillongley.

Let me explain why I am unable yet to let this possible line of research wither on the vine. Henry Arden Adderley (later the 5th Baron Norton) inherited Fillongley Hall in 1872 and it must have remained his principal HQ, except for 1901 when he was visiting his father in London and his daughters and their governess garrisoned with the head gardener, and 1911, when he went to spend Easter (?) at the house in Bude, Cornwall. This last is where it gets interesting. My grandmother, Millicent Farley (born Bonner Breeze), the lady in the picture, was his cook in Bude. Although born in Wales, she grew up with her family in Shropshire and in her early teens rapidly made herself useful as a cook. Until I thought to look for her in the 1911 census (my uncle told me years ago that she worked in Ireland for a spell), the period between 1901 and her marriage in 1914 to Frank Farley was a total blank and likely to remain so. Finding her was a Eureka! moment.

A professional assignment at Fillongley

Also unfathomable is where she and my grandfather met, since he lived in Tamworth with his parents and plied his trade as a decorator and gilder with his older brother. The only link I can come up with is that he had a professional assignment at Fillongley, where over a period of work time he would of course have come to know the household staff, including my grandmother. It’s fanciful, but who knows? Overlaying this conundrum further is the fact that in a fit of manic downsizing before moving south to be closer to my parents, Millie had a bonfire and destroyed all photographs she felt were either unflattering or of no possible interest to anyone else, including photos of my grandfather and those belonging to my mother, who was understandably furious. There is a 30-year gap in images between the photo on this page, and my parents’ wedding pictures.

She was a spectacular character and a superb, intuitive cook and though her kitchen was chaotic, being used to helpers, Christmas was when her versatility and experience came into its own. Thus, since I am the only descendant of both sets of great grandparents, I feel I should do my best to document their and their childrens’ histories.

As you can see, my family travelled widely in the UK, before we ended up in the USA. Hence my extreme interest in the household records of Fillongley, for I feel sure that some veils may be lifted from the shrouded enigma of my grandmother’s working life.