You are here: Home>Locations>Warwickshire unspecified or out of county>Juliette Gordon Low: A Move Away From Wellesbourne, and Founding the Girl Scouts in the USA

Juliette Gordon Low: A Move Away From Wellesbourne, and Founding the Girl Scouts in the USA 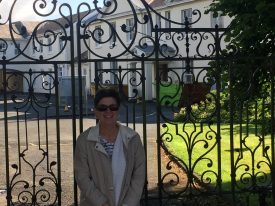 The author outside Wellesbourne House on a visit to England, 2017.
Image courtesy of Karen M. Schillings 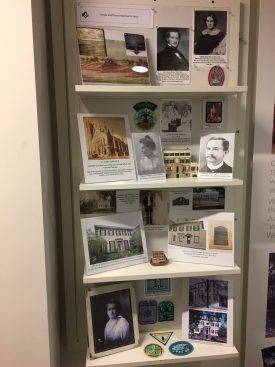 The exhibition "People and Places Important to Daisy" on display in Chicago's council office, 2017.
Image courtesy of Karen M. Schillings

Having rented a summer home in Lochs, she called together a group of girls in the Scottish Highlands, and started her first troop of Girl Guides. When she returned to London for the fall and early winter, Daisy started two more troops. Having made arrangements with friends for her Girl Guide troops to carry on in her absence, Daisy set sail for America in early 1912. By coincidence, Sir Robert was on his way to America as part of tour to promote the Boy Scouts, and he found himself on the same ship as Daisy.Supposedly, during the voyage, Daisy and Robert made plans to organize the Girl Guides in America.

On March 12, 1912, the first Girl Guides meeting was held in Savannah, Georgia with 18 girls joining the troop. In 1913, a National Headquarters was opened in Washington, D.C., and the organization’s name was changed to the Girl Scouts of the United States of American (GSUSA). Juliette wanted to put her girls on an equal footing with the boys, which prompted the name change from Girl Guides to Girl Scouts. Juliette’s vision and remarkable dedication kept the movement alive. Since its inception, the Girl Scouts of the USA has promoted courage, confidence, and character through the Girl Scout Promise and the Girl Scout Law, touching the lives of over 50 million American girls.

Juliette Gordon Low died in Savannah, Georgia on January 17, 1927. She was buried in her Girl Scout uniform. A note was placed in her pocket which read: “You are not only the first Girl Scout, but the best Girl Scout of them all.”

Daisy’s legacy has been well recognized over the years.

I had the good fortune to visit Wellesbourne during a recent trip to England. The house Daisy so loved is now an office complex. However, it was nice to see the replicated gates and to imagine what a lovely home it once was. I’m sure the many people who enter those gates today are unaware of the lovely lady who once lived there.

The previous article looked at her leaving Wellesbourne, and meeting Baden-Powell.