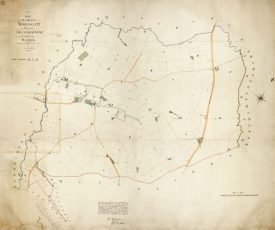 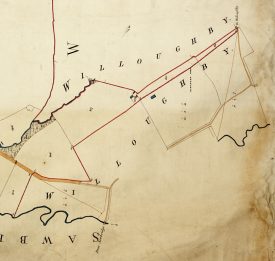 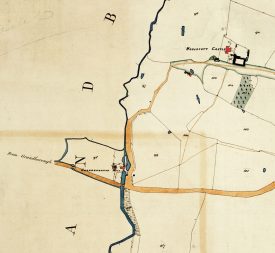 Surveying all the titheable land in England and Wales was a huge task but initially the Commissioners in London hoped it could form the basis for a national survey of land by demanding a high standard of surveying. As with many such endeavours, the biggest stumbling block was money and so the high standard surveys became an option rather than a requirement. Any maps which met the higher standards were stamped as ‘first class’ by the Tithe Commissioners, but although there are many similarities between maps, they can vary considerably in detail.

The responsibility for producing the maps and apportionments was passed to surveyors employed by local landowners and unsurprisingly, many parishes chose not to pay for an expensive ‘first class’ map. It was much cheaper to take an old parish map and bring it up to date, rather than to start from scratch with modern surveying methods.

The parish of Grandborough was dealt with in three sections for the purposes of tithes: the village of Grandborough itself, and then the two hamlets of Woolscott and Calcott to the south and north of the parish. Only two maps were produced as Grandborough itself was not subject to tithes at the time (or so they thought). The map for Calcott is small and basic and was not sealed as first class (as shown by a pencilled note from the Commissioner).

The map for Woolscott is one of the more detailed tithe maps for Warwickshire, going so far as to mark the positions of field gates across the parish and to show differences in land use with coloured illustrations, distinguishing between osier beds, plantations and orchards. The map also shows the complicated parish boundary with nearby Willoughby, marking what may have been boundary stones with letters running from A to H where the boundary changes course without any landscape feature such as a stream or hedgerow to follow.

Like many tithe maps, the Woolscott map also distinguishes between field boundaries and divisions of fields. Solid lines mark actual field boundaries (most likely a fence or hedge), while the dotted lines mark the divisions within a large field, each with its own plot number to record owner and occupier in the apportionment.

Although Grandborough is a detailed map, it doesn’t always tell the full story on its own. Just north of the Tally-Ho Inn, for instance, is a fairly nondescript collection of buildings which could easily be overlooked. The apportionment reveals this to be the site of a windmill, which disappeared sometime in the first half of the 20th century.

Apparently, a  ‘first class’ seal didn’t mean the surveyors got it right on the first attempt. Two years after the initial apportionment was made, a supplementary apportionment had to be added to record the tithes due on Grandborough mill which had been missed off the first apportionment. It makes you wonder whether they also had to alter the map to include the mill, or if it had been included in the map in the first place, and just omitted from the apportionment.