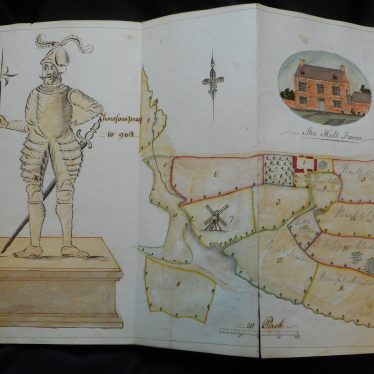 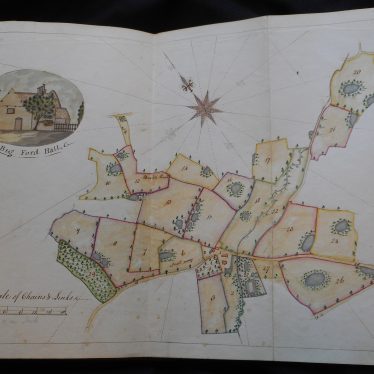 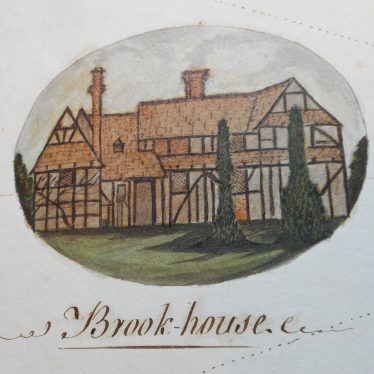 Local historians are well acquainted with the beautifully drawn and elaborate estate maps made for local landowners in the 17th, 18th and 19th centuries. They may be less familiar with estate survey books from the same period however, that were created by mapmakers when they had too much information to squeeze onto a single sided map – even a map more than six feet tall!1

The art of the survey book

Warwickshire County Record Office holds several such books, but this month’s document is possibly the most colourful example, produced by cartographer Thomas Buckle in 1794.2 The volume lists details of lands belonging to John Burman esq, in the parishes of Tanworth and Wootten Wawen, in field maps and tables of measurements.  Each entry also features a meticulous illustration of the houses that stood on the land, like Big Ford Hall, Brook House and the intriguingly named, Madams [sic] Farm and Cottage.

Field names and acreages are noted in this survey, but anything of significance to the landowner would have been covered. The original version of Danzey Green windmill is featured on the Hill Farm map, but we are not sure why such a splendid knight is included – some connection with The Hill Farm perhaps?

The style is not as refined as the illustrations in some other survey books (for example CR8/184 contains intricate pen and ink drawings of the Earl of Craven’s estates in the late 1770s), but in books like these lucky historians can find a faithful representation and only surviving image of buildings as they appeared in the late 18th century.

Thomas Buckle himself may not have been a full-time cartographer as early routes into the profession were many and varied: apprenticeship, military service, mathematical schools or through a family trade.3 He is listed as a surveyor in the Universal British Directory of 1791, living in Kempsey in Worcestershire. While there are no other examples of his map work in the Warwickshire County Record Office collection, several examples are held by Worcestershire Archive and Archaeology Service, including a plan of Lords Meadow in Kempsey. This can be found in the Bishopric of Worcester estates collection.

This article was Document of the Month for the Warwickshire County Record Office in May 2017.  Further articles can be found on their website.