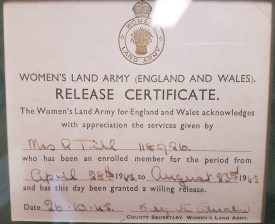 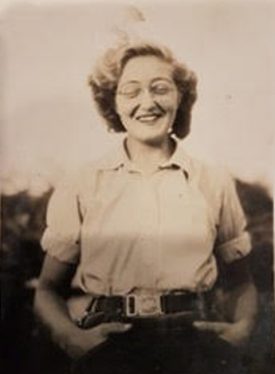 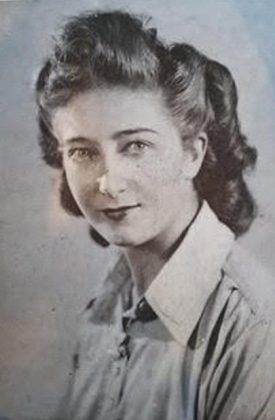 I was born in Fulham on 18 January 1926 and was one of eight children. Three brothers went into the armed forces at the start of WW2 but one could not as he was born deaf. In 1942 aged 17 years I signed up for the Women’s Land Army and was sent to Ashow in Warwickshire where I stayed for three years.

The work was hard but I would get up each day with the other girls I was billeted with in the hostel, collect my orders and get one of the bicycles kept outside the side door and set off for the day. We could be sent anywhere within a ten mile radius. I still have very vivid memories of my time in the service and was particularly fond of working for Farmer Eakins in the village. There was a lovely long lane lined with trees leading up towards the farm which was so peaceful you could almost forget there was a war on as you went on your way.

Calling in the cows

I would be sent out to call in the cows from the fields, Betsy would be first then all the others would follow. Milking was by hand initially but later machinery was bought in to help. The work was hard; digging, hoeing, threshing and looking after the crops. And lunch was usually beetroot sandwiches!

We didn’t have much time for a social life but when possible I would go with my best friend Iris into Leamington Spa and the cinema. I remember once the usherette called me to the foyer, and as we weren’t supposed to be there that night I was a bit concerned we’d been caught out. To my surprise I found my brother Ben waiting for me. He had a few days leave so he spent it with me – a villager gave him a bed for the night – and we walked the lanes and just talked and talked. It’s one of my most special memories to this day.

Sent off with a cabbage

If I went home on leave Farmer Eakins would send me off with a cabbage or something for my family if he could. Once he wrapped up a plucked chicken and sent me off to catch the train home. All the way back I worried that someone would see what I had as I knew many would think I’d got it on the black market. Needless to say arriving home with such a treasure made sure my parents remained supportive of my time in the Women’s Land Army!

My mum told me she never worried about me, as I was safe in the country. I never told her we would be in the fields, see planes overhead and would regularly run for cover.

I left the service in 1944 after I married my husband Rodney, a friend of my brother Ben, to become Rose Evelyn Till. He was posted to Germany near Muenster Larga and there we started our family. We returned to England and finally had nine children. We emigrated to British Colombia, Canada when my husband retired and that is where I still live today. I kept in touch with Iris until she passed away a few years ago and enjoyed many more chats with Ben over the years. He knew I never stopped thinking about my life in the Land Army and so my brother made sure I received my commemorative medal of which I remain very proud.

With thanks to Sheila Ladds, her daughter, for obtaining the piece and transcribing it.