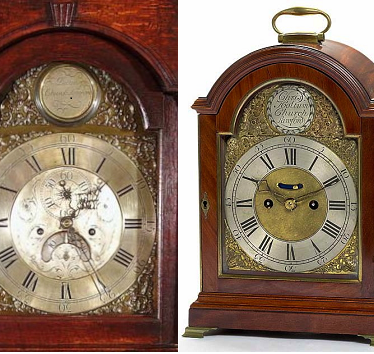 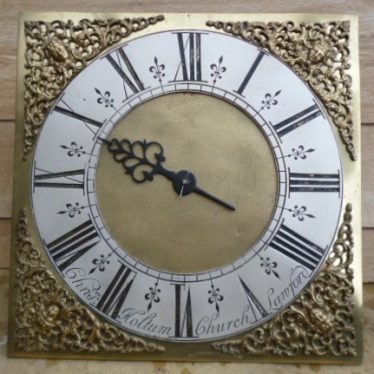 A Christopher Holtum thirty-hour clock dial. The back of the back plate is dated 1742.
Image reproduced courtesy of Dennis E Haynes. 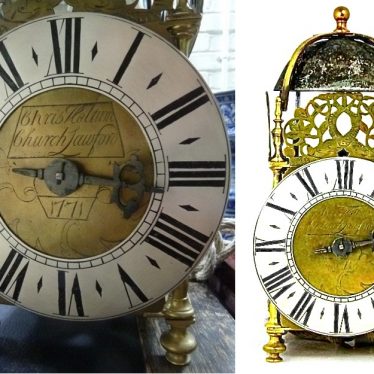 For a small village, Church Lawford certainly had its fair share of clock makers, of which Daniel Dalton was one. There is an intriguing record that may explain how the young Daniel Dalton entered the clock making trade. Christopher Holtum (sometimes found as Holtom or Holtam) was a clockmaker and inventor who set up in business in Church Lawford – the birthplace of his wife Ann, née Garfield – in the early 1700s. Reference to the estate rental records1 show that in 1723, on the death of John Garfield, his father-in-law, John’s tenancy of the family home passed to Christopher Holtum (Christopher’s name is sometimes given as Xopher in the rent books).

In league with Christopher Holtum?

Another reason to believe that the two clock making Daltons were in league with Christopher Holtum or were trained by him and certainly influenced by him comes from comparison of the style and similarity of two clocks. One is by the Daniel Dalton in the image and the other by Christopher Holtum, both shown in the pictures below. Brunn Rasmussen at Bredgade, Copenhagen, sold the Holtum clock on 28th September 2011.

It was described as: “A George III mahogany bracket clock, brass dial with openwork corner ornaments, pewter chapter ring. Plaque marked Chris Holtum Church Lawford, England, late 18th Century. Height 43 cm. It sold for 12000 Kroners (€1,600)”2. The working condition was not stated. The inference is that one, or both, of the Daltons were apprenticed to Christopher Holtum and later set up their own businesses. As Daniel Dalton Senior was a carpenter the Daltons may have made cases for Christopher Holtum. On the other hand the similarity could be coincidental: many clocks looked very similar in those days.

Another similarity of these two clocks is the design of the chapter rings; they are identical. The styles of the maker’s medallions in the arched tops are also similar. However the chapter rings and medallions may have been sourced from the same supplier. Three other Holtum clocks that are inscribed as originating in Church Lawford are pictured also.

1 The Northamptonshire County Record Office holds the rent books of the estates of the Dukes of Montagu and the estates of the Duke of Buccleuch and Queensbury. The 2nd Duke of Montagu’s daughter, Elizabeth, married the son and heir to the Duke of Buccleuch in 1767 and when her father died without male issue she became an heiress so the Montagu estates merged into those of the Dukedom of Buccleuch and Queensbury. The Dukedom of Montagu became extinct. Today the Buccleuch family name reflects the merger: it is Montagu-Douglas-Scott. The tithe map for Church Lawford, 1851, shows the land lord of the district was Lord John Scott, second son of the 4th Duke of Buccleuch. The Duke was Lord of the Manor in 1900 but may have sold his interests in 1919 when the advowson was transferred to the Bishop of Coventry.

2 The author is most grateful to Bruun Rasmussen of Copenhagen for permission to use images of the Holtum clocks, and to quote the company’s description of the bracket clock on this page.