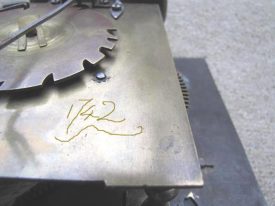 Backplate and date of a thirty hour movement clock made by Christopher Holtum of Church Lawford, 1742
Keith Sinfield, 2015 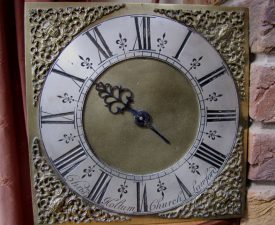 On 11th January, 1711, the following advertisement appeared in the London edition of ‘The Tatler’: –

This is to give notice, That at the ‘Seven Stars’ under the piazzas in Covent-Garden is to be seen from this Day till Thursday next, a chariot, in which a Man may Travel without Horses. It will go 5 or 6 miles an hour and measure the Miles as it goes, and goes up Hill as easily as on level Ground; the like of which was never made nor seen in England before. Performed by Chr. Holtum, the first Author of a Larum for a Pocket Watch.

A number of advertisements

This was one of a number of advertisements placed by Christopher Holtum in London newspapers, January to March, in which he gave notice of demonstrations of his ‘horseless chariot’ – this, almost 175 years before Karl Benz patented his motor-car!

Sadly, although we have spent four or more years combing the records we have been unable to shed any light on his horseless chariot. Clearly though, it didn’t achieve the success that he, no doubt, wished for, because in an advertisement in ‘The Daily Courant’ of 19th February, 1711, he declared: –

“It may be seen to the 1st or 2nd of March, being then to Travel into the Country.”

Moving from London to the country

So, by March he had given up and decided to move away from London to the country – and this is where we have been able to pick up the remaining chapters in his life. The Duke of Montague’s estate records, held at Northamptonshire County Records Office, show that he became a tenant farmer in our village of Church Lawford – the records also show that his home was only 100 yards or so from where we live! That he chose to live in Church Lawford comes as no surprise, because he was married to a woman from the village: Ann, the daughter of John and Elizabeth Garfield. His name crops up in the Duke’s estate records a number of times, mostly in connection with the granting of building materials to maintain his cottage, but in one instance he is granted materials to extend his ‘shop’ – and this is where we get a clue to the particular kind of ‘cottage industry’ that he adopted for himself. Making clocks, we think, became the principal means by which he earned his living. Though lesser well known than the other clock-making family in Church Lawford, the Daltons, there is circumstantial evidence to suggest that at least one member of that family was apprenticed to Christopher Holtum.

Christopher and Ann were married on 3rd March 1710 at St Bride’s church, Fleet Street, whilst Christopher was still working in London. Their first child, Elizabeth, was baptised at St Peter’s Church, back in Church Lawford, on 1st February, 1711 – she later died when only 25. They had a second child, Mary, baptised at St Peter’s Church, on 17th February, 1716. No further records were found for Mary, marriage or burial, so it is assumed that she moved away. Strangely, Christopher and Ann both died within weeks of each other, in May 1749, cause unknown.

A number of clocks still remain

A number of clocks made by Christopher Holtum still remain. One of which, dated 1742, we obtained three years ago: we thus had the pleasure of returning to the village an example of his craft 270 years or so after it was made!

We would be pleased to hear from anyone who can provide us with more information concerning Christopher Holtum, either his clock-making activities or, especially, his horseless chariot. Meanwhile, visit the following website for a fuller analysis of Christopher Holtum’s activities, clicking on ‘More Articles’, then, article No. 17.