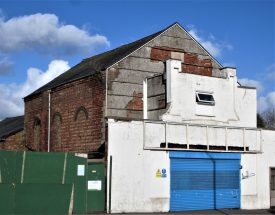 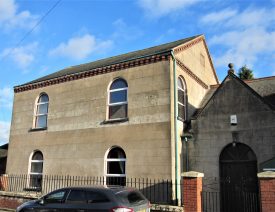 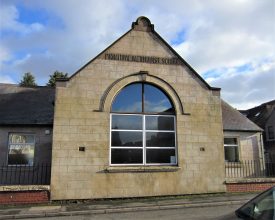 The first Primitive Methodist Chapel in Bedworth was built in 1830 in King Street near the bridge over the railway, with seats for 120 people. Details were recorded in the 1851 religious census. The form was filled in by John Orton, surgeon and registrar of births and deaths from Little Heath, but sadly he did not record the attendance, nor whether there was a Sunday School (surprising in view of his occupation).1

The chapel was rebuilt in 1876 in red brick in the classical style with a slate roof, and had 370 seats. The congregation belonged to the Coventry Foleshill Primitive Methodist circuit. The building was sold and converted into the Star Cinema in 1921, which was taken over and renamed the Plaza Cinema in 1947 before closing in 1958. The site was subsequently used by a removal firm but has stood empty and ripe for redevelopment for some years (an application to demolish it in 2014 being turned down). The building – with additions to the front and rear for the cinema – is still standing in 2020 and a plaque can be seen where render over the entrance has fallen off, but is now illegible.

An ‘Ebenezer’ Primitive Methodist Chapel was built in Back Lane (now Orchard Street) in 1851 on the site of a donkey stable;  the chapel had 56 seats and cost £106. Details of the congregation were recorded in the 1851 religious census, and there was an attendance of 56 adults at afternoon and evening services and 35 children at the Sunday School. The Minister for this chapel (and Bulkington) was Joseph Harris.2

The chapel was rebuilt with 120 sittings in 1878, in stone with brick details and a slate roof. The plaque on the chapel reads ‘P. METHODIST CHAPEL 1851 rebuilt 1878 EBENEZER’. The congregation was originally part of the Foleshill circuit but later joined the Atherstone and Nuneaton circuit. The premises were extensively refurbished with grant aid from various sources in 2010. This chapel appears in a trade directory in 1874.3

More details can be found in the Warwickshire Chapel section of the My Primitive Methodists website.