You are here: Home>Locations>Rugby>Rugby Radio Station 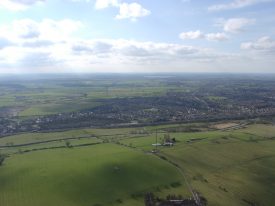 View of Hillmorton in 2002, taken from 820ft Mast No.2.
Photo supplied by Malcolm Hancock. 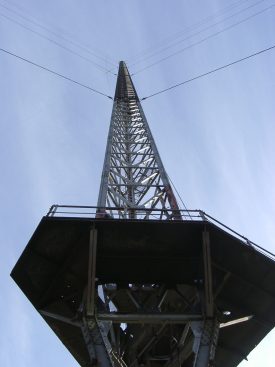 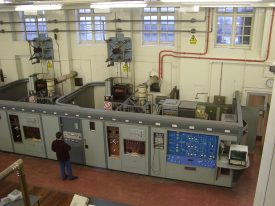 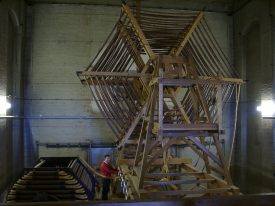 Following the First World War, the government were determined to set up the long delayed Imperial wireless network. They wanted the station in this country to be government run and the General Post Office were given the job.

Hillmorton, Rugby was first mentioned as the chosen site on 14th June 1923, and on 1st January 1926 the GBR (16 kHz) Long Wave (Very Low Frequency) service opened. The transmissions were in Morse code with a transmitter output power of 350kW – at that time the world’s most powerful transmitter using thermionic valves, giving Worldwide coverage. The aerial was suspended from 12 820ft masts built by Head Wrightson & Co. Ltd. of Thornaby-on-Tees.

Just a year after the Radio Station opened, the first radio telephone service from the UK to the USA began. Later this service could carry a maximum of two telephone calls. The cost of a call during the first year of service was £15 for three minutes, about £600 at today’s prices. The service was transmitted from Rugby, and the receiving station for the return leg of the circuit was at Wroughton in Wiltshire.

Although circuits on Short Wave were not quite as reliable as Long Wave, the transmitters needed much less power and smaller aerials. This reduced costs and increased demand for short wave circuits. Therefore, a second building (Rugby ‘A’) was opened in 1929, and by 1935 Rugby was capable of transmitting many, mainly telephone, circuits to any country anywhere in the world.

During the Second World War, from 1943-1945 Rugby transmitters were used to jam German night fighter WT transmissions. This was called operation “Corona” and used fluent German speakers at RAF Kingsdown to send out false and misleading information.

Rugby Radio at its Peak

The size of the site was increased from 900 to 1600 acres by the purchase of land on the Northamptonshire side of the A5 Watling Street. A new building, Rugby ‘B’ as it was called, was opened in July 1955 by the Postmaster General Dr Charles Hill (The wartime “Radio Doctor”). Rugby now had 57 transmitters and was the biggest radio transmitting station in the world.

In the mid 1960s, circuits at Rugby were set up for use by NASA on the Mercury and Gemini space flights. The “Concorde” aircraft also had a radio circuit through Rugby. Because of its height and speed it couldn’t use satellite services, so when out of VHF range over the Mid-Atlantic, it used HF for its “Speedbird” communications back to British Airways HQ.

During the Falklands War in 1982 a special South Atlantic short wave circuit was urgently set up for the MoD. This, together with the GBR VLF transmitter used by the MoD(N), helped in the war effort.

The beginning of a slow decline

When the first transatlantic cable opened in 1956, some of the traffic started to move away from Rugby. Over the next ten years Rugby changed from carrying the high density telephone traffic of North America and Australasia, into providing better telephone and teleprinter services to countries in areas that had no direct cable access. These countries (in Africa, South America, Asia, Iceland etc.) only required a small number of circuits. Press services for Reuters and London Press Service (LPS) continued with teleprinter news and picture transmissions.

With the advent of satellite communications, Short Wave International land based, point-to-point, radio services continued a slow decline. Other Radio Stations closed, as the remaining services were concentrated at Rugby. Between 1987 and 1992 the station was converted to carry an improved long range maritime service. Finally even the ships services started to transfer to satellite. The number of transmitters required reduced and all maritime commercial services were concentrated at the ‘B’ Building. The ‘A’ Building closed as a radio station in the early 1990s.

The End is Nigh

The ‘B’ building maritime services finally closed at the end of April 2000. This left only two telegraphy and the Time Signal services at the original building now called Rugby ‘C’. The remaining four 820ft masts were demolished at 15:00 BST on Thursday 2nd August 2007.

The full article is available in the ‘Downloads’ section below.