You are here: Home>Locations>Whichford>Whichford Castle Moat 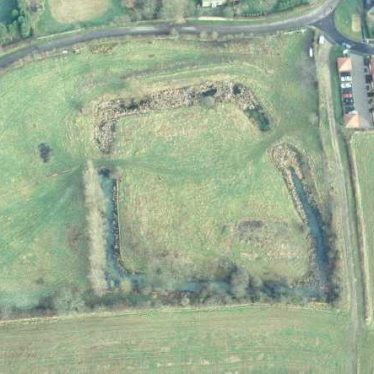 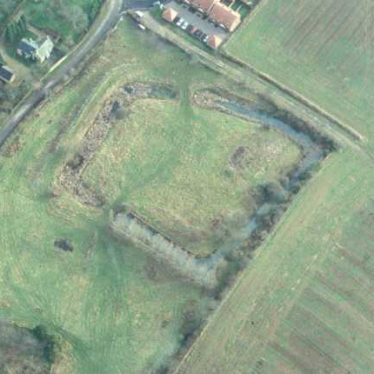 Whichford Castle Moat, a wide ditch surrounding a building, which dates to the Medieval period. It is probably of a later date than the inner building of which traces survive. It is visible as an earthwork, and is situated 200m west of the church at Whichford.

1 Described as a ‘Moat’ on the OS map this represents a manor-house or castle probably built by Reginald Mohun, lord of the manor, 1204-13.
2 An approximate square enclosing an island of about 60.9m across or rather more. Traces of an internal building survive (PRN 5268). The moat is now some 2.4 or 2.7m deep, and the bank on the outside is built up to give the necessary depth. Except for part of the W side it is now quite dry; there are several springs on the side of the hill, one of which seems to have been the means of supplying it with water. The earthworks suggest something more than an ordinary homestead moat.
3 The rectangular moat has a smaller rectangular projection on the N. The site occupies a strong natural position commanding a valley to the N. The ditch is about 4.6m wide and 3m deep from the top of the inner bank which is 0.6m to 0.9m high. At the E edge of the site the ground falls sharply away and a substantial bank has been thrown up to enable the moat to hold water from a stream rising in the SW corner. There are traces of an entrance in the centre of the S side, and the stone revetment of a bridge connecting the two enclosures can be seen.
4 The moat is at present used as a dump for old cars and a piggery.
5 Excavation in 1953 revealed a curtain wall of large ironstone blocks running along the inner edge of the ditch. This masonry is of a different type from that of the domestic buildings; this fact and the finding of pottery contemporary with that from the ruins of the buildings in the spoil-bank of the ditch may indicate that the ditch is later than the buildings that it surrounds.
9 In about 1968 the moat was deepened and widened in order to hold fish.
10 The moat and curtain wall were probably constructed in the late 13 century or early 14 century (i.e. after the buildings were erected), based on the fact that the material of the outer bank, which was obtained from the digging of the moat, contains pottery from this, the main period of occupation. It seems that the original entrance to the site was probably on the south side, although at present, the only positive evidence for this is a causeway. Halfway along the N side a rectangular tower projects into the moat; its function is as yet unknown, however.
11 Rescheduled as Monument No 21621 with a slightly amended schedule boundary in January 1998.