You are here: Home>Locations>Leek Wootton>Site of Possible Moat 300m W of Woodcote 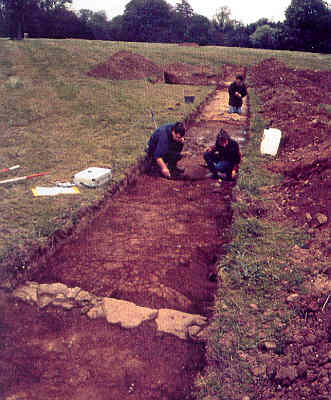 The site of a possible Medieval moat, a wide ditch surrounding a building. The moat is visible on aerial photographs. A geophysical survey and trial trenching have taken place at the site, which is located 200m west of the Police Headquarters at Leek Wootton

1 A probable moat is visible at the above grid reference on aerial photographs. The site was under crop and could not be investigated.
2 No reference could be found on early maps in the County Record Office.
3 The site is faintly visible on air photographs as a square or rectangular enclosure.
4 The field was under crop when visited and no trace of the moat was visible on the ground.
5 This site was surveyed during the course of an archaeological evaluation. Only the northern part of the moat arm was visible from an earthwork survey. A slight depression to the south of the moat was also indentified, possibly the remains of a pond. A magnetometer survey revealed a spread of demolition material related to a range of buildings on the north side of the moat platform. The precise number and function of the buildings remains uncertain. Trial trenching recorded the northern and southern sides of the moat. The ditch of the moat may have measured up to 3.00m in depth. The moat ditch was found to be unusually wide. The sandstone footings of a substantial structure were exposed on the northern edge of the moat platform, it probably formed part of a large, part-timbered house with a tiled roof.
6 Negative watching brief conducted during new developments on the west side of the police headquarters, immediately east of Lower Woodcote Medieval moat.
7 Letter relating to 6.