You are here: Home>Locations>Radway>Radway Medieval Settlement 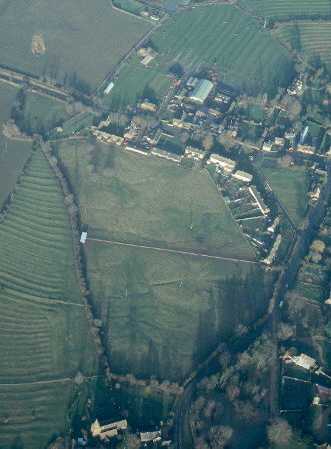 The possible extent of the Medieval settlement of Radway based on the Ordnance Survey map of 1886.

1 The possible extent of the Medieval settlement, based on the first edition OS 6″ map of 1886, 52NW.
2 The ridge and furrow plotting of the parish.
3 The village is listed in Domesday in Hunsbury Hundred. The Phillimore edition has a grid reference of 36,48, which is slightly different from this monument which is 37,48. There are 3 entries:
Ref 6,20 (Land of Coventry church) in Radway 3 hides. Ermenfrid holds from the Abbot. Land for 6 ploughs. In lordship 1; 4 slaves. 13 villagers and 6 smallholders have 5 1/2 ploughs. Meadow 16 acres. The value was 20s; now 50s.
Ref 14,6 [Land of Earl Aubrey] in Radway 2 hides. Land for 3 ploughs. Harding held it, he was free, with the (land). 4 villagers and 1 smallholder with 1 plough. Meadow, 8 acres. The value was and is 20s. These lands of Earl Aubrey are in the King’s hands. Geoffrey of La Guerche has charge of them.
Ref 44,6 (Land of Richard the Forester and others) Also from Ermenfrid holds 1 hide at a revenue in Radway. Land for 3 ploughs. In lordship 2, with 1 slave; 1 villager and 3 smallholders with 1 plough. Meadow 3 acres. The value was 20s; now 25s. Earl Ralph held it before 1066.
4 The 1886 map shows quite a large village built along the main streets with no back lanes and few empty plots. There are lots of orchards and trees in general. The edge of the settlement is marked by the end of the gardens or by the streets. The ridge and furrow plotting shows earthworks in the northwest part of the village and survival abutting the settlement all round, except for a gap in the south east. The original church [WA694] was C13th. WA752 is a medieval monastic grange, and WA7328 is the site of shrunken settlement. Domesday indicates quite a valuable village in multiple ownership.