You are here: Home>Locations>Hartshill>Oldbury Hall 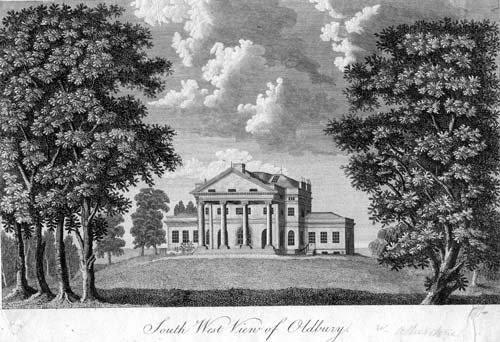 The site of Oldbury Hall, a house which was built during the Imperial period. It burned down in 1941 but was situated 300m north of Oldbury Grange.

1 Oldbury Hall stood within the area of Oldbury Camp. This was a large 18th century Palladian house of three stories with walls of brick coated with cement. It had a portico on the SW front of two storey height with Ionic columns and a pediment and on the opposite front a large bow window. Lower wings flanked the sides. This building was burnt down in an air raid in 1941.
2 The site was burnt down in 1941 and levelled in 1948.
3 Some of the outbuildings of the hall remain to the S but there is nothing of any particular interest.
4 A reservoir has now been built over the site of the hall.