You are here: Home>Locations>Ilmington>Moat to W of Manor House

Moat to W of Manor House 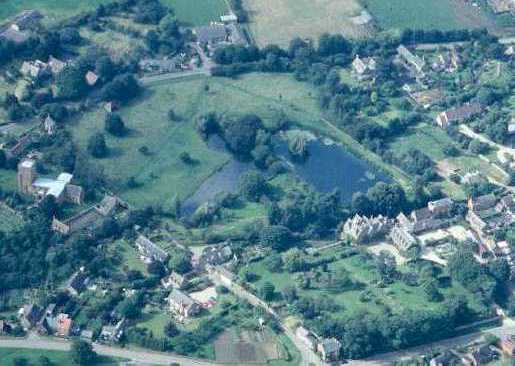 The site of a Medieval moat, a wide ditch usually surrounding a building, which lies under a fishpond. Part excavation has uncovered some Medieval occupation debris, and the site remains visible as an earthwork. It is situated to the north of St Mary's Church, Ilmington.

1 1976: An exploratory excavation confirmed the existence of a moat under one of the ponds. Two trenches were dug; Trench 1 through the inner bank of the moat and Trench 2, a 5m square, near the centre of the moat. Trench 1 produced a rubble area associated with late Medieval pottery and roof tile fragments. Below this was a grey clayey soil containing pottery provisionally dated to 12th – 13th century. The fill of the moat contained wet blue-grey silt, but was not bottomed. Possible traces of a recut were also found. A number of glazed and decorated tiles of late Medieval date were found. A fragment of 16th century jug handle was found in the top layer. Trench 2 located an area of rubble containing pottery, animal bone and charcoal. Other layers at a greater depth also contained pottery. Sherds recovered have been provisionally dated the 12th – 13th century. The evidence suggests that there was originally a moated site here. By the 14th century an internal building was in a state of disrepair and at this time the moat was recut on two sides to provide fishponds.