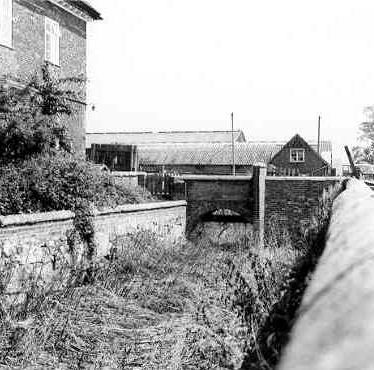 A moat, a wide ditch surrounding a building, which was built during the Post Medieval period. It is situated 1km south of Shustoke.

1 Shustoke Hall dates from late 17th century and is surrounded by a rectangular moat. This moat is partly revetted with masonry; the S arm is crossed by a brick bridge and has steps down to the water. The W arm is dammed for another entrance which has a pair of gate-posts with stone ball-heads. A human-head corbel has been reset in the S moat wall.
3 The moat is water-filled. 1976, filled with stagnant water and overgrown. It measures 68m N-S by 52m E-W and the arms are from 5 to 8m in width. The S arm is revetted with brick on both sides and is crossed by a brick footbridge with steps to the water alongside. These features are probably 17th century and contemporary with the house. The other arms have steep earthern sides. Water for the moat is provided by a spring within it. There are no nearby streams.
4 Apart from some pools and marshy ground the moat is for the most part dry and thickly overgrown, although comparatively well preserved.
5 Photographed in 1977.