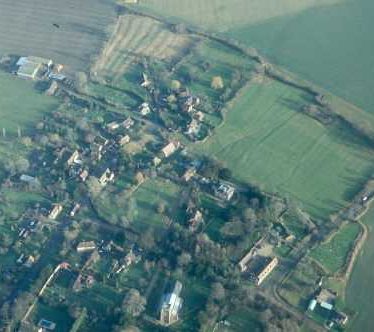 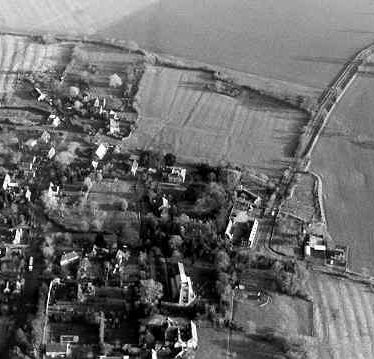 The possible extent of the Medieval settlement of Leamington Hastings based on the Ordnance Survey map of 1886.

1 The possible extent of the medieval settlement, based on the first edition 6″ map of 1886, 34NE.
2 Leamington Hastings is listed in Domesday in Marton Hundred. The Phillimore edition gives a grid reference of 44,67.
Ref 39,1 Hascoit Musard holds 12 1/2 hides and 1/2 virgate of land from the King in Leamington (Hastings). Land for 27 ploughs. In lordship 7 ploughs; 15 slaves. 33 villagers with a priest and 24 smallholders have 18 ploughs. A mill at 2s; meadow 20 acres. The value was £10; now £12. Azor held it freely before 1066.
3 The 1886 map shows the southern side taken up by the buildings and grounds of the church, the vicarage,the manor house, and the almshouses. On the northern side there are some buildings, but also empty plots and trees. The empty field on the northwestern corner looks as if it had been part of the settlement. Domesday indicates as populous, valuable village. The church dates from the C13th.