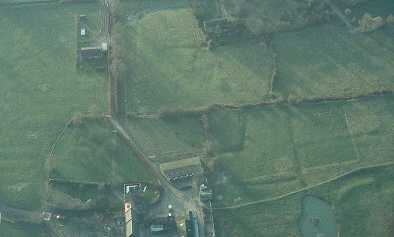 The possible extent of Medieval settlement, including the known shrunken area WA3079. The extent of the settlement is suggested by documentary evidence.

1 The possible extent of Medieval settlement, based on the first edition 6″ map of 1886, 35NW.
2 The ridge and furrow plotting of the parish.
3 The map of 1886 shows a hamlet with most occupation west of the main street. The boundary line is clearer on the east. The ridge and furrow plotting shows survival, particularly to the west and south where it is seen to abut the settlement. There is no church, but the manor house [WA3059] dates from the medieval period, and WA3079, called ‘The Green’, is a known area of medieval shrunken settlement.
4The extent of the earthworks were enlarged to reflect HER lidar layer