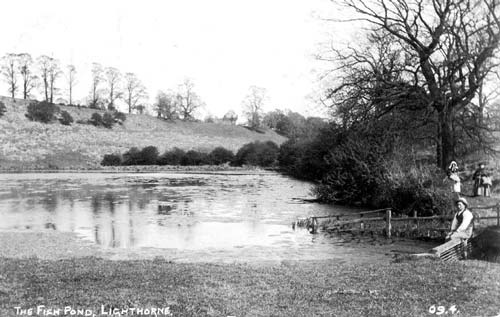 Medieval/Post Medieval fishponds, used for the breeding and storage of fish. They are still visible as earthworks and are situated 200m west of the church at Lighthorne.

1 Two fishponds marked.
2 Situated in a small steep-sided valley to the SW of the church. One of these ponds (SP3355) is now silted up and marshy. The other (SP3356) is still waterfilled. Further earthworks can be seen in the vicinity of the ponds. A linear bank starts at SP3355, is cut by the stream and continues in an ENE direction to finish at SP3355. This bank is situated at the SE-most point of the silted-up pond. A further linear bank appears to surround the whole complex.
The upper pond (SP3355) was dredged and refilled with water about 1980. Part of the linear bank (SP3355/ SP3355) was levelled at the same time.

email
More from Lighthorne
More from Hunting, Shooting and Fishing