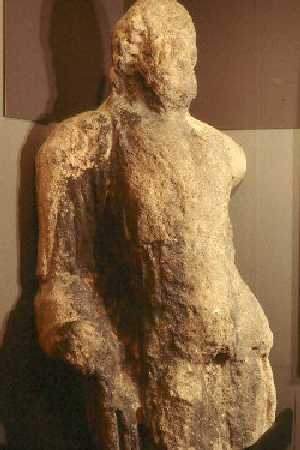 Findspot - a Roman statue, possibly of the god Mars, was found. The exact location of the findspot is unknown but it probably came from Alcester.

1 A curious monument is built up in a wall adjoining the rectory, W of the church. This is a much mutilated torso, 1.06m long by 0.5m broad, with face flaked off and legs lost. It appears to have represented a male bearded figure, dressed in a sort of tunic or chiton; the left leg is advanced, the left arm drawn back, and drapery depends from the left shoulder. The whole is too ill-preserved for safe interpretation, but it may be accepted as Roman. Its origin is unknown, but it was doubtlessly found somewhere in Alcester.
2 Removed for protection and placed for security in the Grammar School. The back part of the figure now exposed shows the folds of the garment much more clearly.
3 Photograph.
4 On display in the Market Hall Museum. Thought to be a statue of Mars.
5 Mentioned in Seaby’s 1954 list of finds from Alcester. It is reported to be a 3/4 length Roman effigy much mutilated, 42 inches long and 20 inches broad. Some authorities believe this stone to be a representation of a Roman centurion, according to a lecture from A.J. Gwinnett.

Linkedin
More from Alcester
More from Objects and Finds