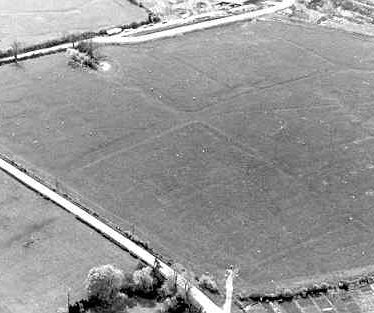 The Medieval deserted settlement of Dassett Southend. In some areas the remains of the settlement are visible as earthworks and there is good documentary evidence for the settlement. The site is located between Temple Herdewyke and Little Dassett.

1 The figures in the Lay Subsidy returns of 1327 and 1332 suggest that Southend was more than half as large again as any of the other hamlets in Burton Dassett. The name is no longer current, but the place should be sought to the S of Northend. Here, around the 13th century chapel (PRN 651) earthworks have been traced over some 35 ha suggesting a settlement of some considerable size. In 1267 Bartholomew de Studley acquired a market at Dassett, and it seems likely that Northend and Southend together made up the settlement known as Chipping Dassett.
4 The M40 will cut a swathe 75m wide across the W side of Dassett Southend and the building of a bridge for the present road will cause further damage. Excavation began in May 1986 and will last until motorway construction begins in Spring 1988. The original settlement was around the parish church (PRN 656). The 12th and 13th centuries saw a shift of settlement downhill to the sites at Southend and Northend. After foundation in 1264 the market prospered and in the early 14th century Burton Dassett had the third highest number of taxpayers in Warwickshire. The bulk of the population, which can be estimated as about 800, were at Southend. In the 14th to 15th century it went into decline and in 1497 Sir Edward Belknap evicted the last 12 households. The main part of the 1986-7 excavation covered a row of buildings along the N side of the street (PRN 6191), while to the S of the road Medieval and Post Medieval buildings have been fieldwalked (PRN 6192, 6193). Neolithic/Bronze Age flint and Roman pottery has also been found (PRN 6194, 6195).
5 Short interim description 1987.
6 Short interim description 1988.
7 Short interim description 1989.
8 No ref.
9 Short interim description 1989.
10 Short interim description 1986.
11 Letter from HBMC inclosing a plan by J. Bond of the DMV showing the M40 route.`
12 The plan referred to in 11, but without the M40 proposed route shown.
13 Ministry of Transport map showing the proposed route.
14 Single summary sheet on the site, extracted from an Introductory Note to List of Ancient Monuments in England. HMSO for DoE.
15 A series of archaeomagnetic dates were obtained from six ironstone hearths from the excavations at Burton Dassett; four of the hearths produced reliable results, dating to the late 14th century through to the early 16th.