You are here: Home>Locations>Coughton>Coughton Court 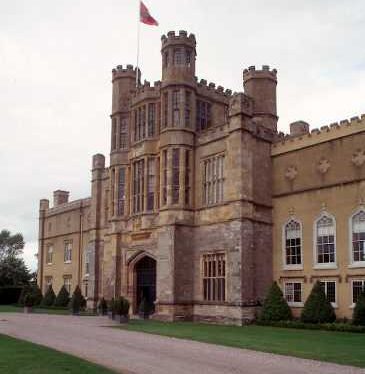 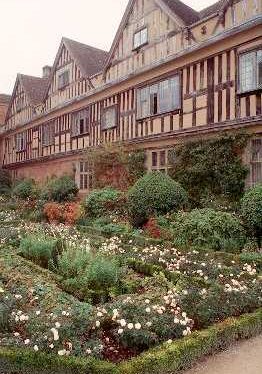 Coughton Court, a manor house dating from the Medieval to the Post Medieval period. The manor house was once surrounded by a moat. It is now owned by the National Trust and is situated in Coughton.

1 Partly timber framed and partly of stone and brick. It is ranged around three sides of a courtyard. The eastern range was destroyed when the house was pillaged by a protestant mob from Alcester in 1688, and its ruined remains were cleared away in 1780. The timber framed north and south wings are probably early 16th century, built by Sir Robert Throckmorton. The stone gatehouse to the west is recorded by Dugdale as being built by his son, Sir George. This probably refers to the present upper part; the lower part, of a different design and materials, probably dates to the late 14th century. The house was originally surrounded by a moat, which was drained and filled in during 1795. There was apparently no berm between the moat and the walls, and tradition speaks of fishing from the upstairs windows. North east of the house and originally separated from it is a detached building of T-shaped plan, dating apparently from the early 16th century, probably built for lodgings rather than for offices or stages. The walls are of ashlar cotswold stone with a moulded plinth of red stone and are repaired with brick under the eaves. The roofs are tiled. Over the entrance of the south end-wall of the south wing is a doorway which is said to have communicated by a bridge over the moat with the vanished east range of the house.
2 At Coughton Court are kept two carved alabaster slabs. One shows the nativity, the other showing the head of St John the Baptist with St Peter on one side and St Thomas of Canterbury on the other. Scratched on the rear are various 17th century dates and names of owners. The making of these slabs was an important industry in Nottingham in the 15th century, and many were hidden during the Reformation. The building is owned by the National Trust and is open to the public. The contents still belong to the Throckmorton family.
3 The oldest part is the gatehouse; the upper stonework is post 1518 but the lower stonework may be earlier. The house was originally a moated courtyard house, but in 1688 the east range (containing the hall) was destroyed. The west range was remodelled in 1780, and extensions were made in 1835.
4 Plan of the house.
5 During salvage recording in 1990-1 evidence for 12th-13th century primary occupation of the manor house was found. Evidence was also found of possible renewed activity in the 15th century. Evidence for the 16th century building plan was discovered.
6 Archaeological observation was carried out in 1994 during tree planting and fence erection around the trees. Such a small area was exposed that it is difficult to draw any conclusions, although a pebbley clay loam with regular clay flecks was observed beneath the topsoil.
7 The area observed in 1994 was once occupied by stable yards and lay adjacent to the former moat. Large sandstone blocks were revealed in one of the tree pits, but no archaeological features or finds were identified.
8 Shortly after the east wing had been removed c1780, the west front was remodelled, and a chapel built in the south wing. This work may have formed part of an overall scheme for Coughton by the landscape gardener, John Davenport. At this point, the house had reached more or less its modern form, though there have been 19th and 20th century internal alterations.
9 Photographs of the East Front and North Wing and of the Dining Room.
10 Excavation report from 1991.
11 Maps from the National Trust.