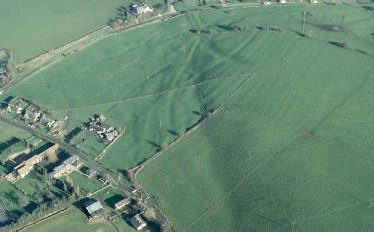 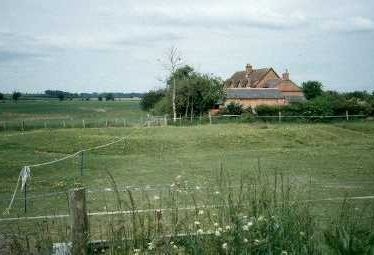 An area of the Medieval deserted settlement of Chesterton Magna known as Le Grenesyde. The site is known from documentary evidence and is thought to be situated in the area to the west of Chesterton Green.

1Part of an extensive earthwork complex including some crofts and houses, among a maze of post-depopulation paddocks and pens; a messuage and crofts confirmed to William de Depyng in 1344 was located on ‘le Grenesyde’, and this was possibly in this area.
2Plan of village
3 Area W of Chesterton Green. Believed by Beresford to represent main village, but systematic augering has disproved this. A couple of cottages may have stood near the modern house just W of the fork in the road, but there is no evidence of extensive settlement.
4 Various air photographs.
5 In the winter of 1997 a small trench was dug to bury the local donkey. It was reported to WART that a limestone wall was observed, together with pottery, bone and shell of Medieval date.
6 Mentioned in 1344 as ‘le Grenesyde’. The remains of at least three building platforms and causewayed road junction with raised camber running in two directions are visible in the field to the north of Green Farm. Aerial photgraphs demonstrate that further extensive settlement remains formerly survived in the larger arable field to the west, including a series of enclosures and building platforms and a chain of at least three fishponds. These remains have been reduced by cultivation and are not included in the scheduling, except for a 15m sample on the eastern edge of the field included in order to preserve the relationship between the earthwork site and the wider settlement remains.
7 WART record card.
8 Three separate areas of rubble spread were recorded during the excavation of a pipe trench as part of flood alleviation works across the shrunken settlement. These were only seen in section, but it is thought possible that they represent yard surfaces, street metalling or even the remains of ploughed out buildings.