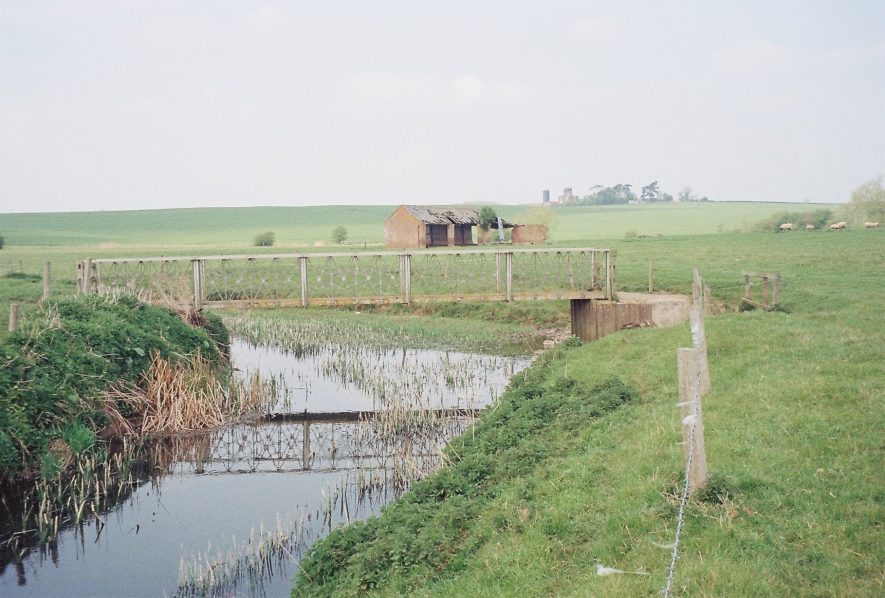 The site of Cestersover with the River Swift in the foreground.
Image courtesy of John Phillpott.
Description of this historic site

The Medieval deserted settlement of Cestersover. The settlement is known from documentary evidence. It was situated 1km north west of Churchover.

1 In 1460 and 1467 patents were granted to a London draper named Henry Waver. He appears to have been a native of this village, which had twelve messuages in 1385. He enclosed 500 acres and Dugdale saw the manor house reduced to a mean condition (PRN 4247-8) and the grounds for the most part converted to sheep pasture. In 1776 Stukeley saw a ditch, a chapel converted into a barn (PRN 4249) and, across the valley, fishponds (PRN 3501). ‘Old Town Field’ and ‘Town Meadow’ are on the Tithe Award map. The site is under plough and most clearly seen on aerial photographs.
2 Very good pattern of roads and crofts, but no house sites visible. Now ploughed (AP). Excellent documentary evidence for former existence with period of desertion known (1*).
3 This site has been ploughed for many years. In 1955 the earthworks were still plainly visible. They have now almost completely disappeared.
4 A pipeline across the site surprisingly did not produce any evidence for the Medieval village.
6 The former village occupied the summit of the hill and foundations have been found in ploughing. 1960: No surface traces.
7 Aerial photographs show an area of somewhat indistinct earthworks surrounding the site of the manor house and chapel. S from this nucleus a single street runs in a dead straight line, with crofts regularly spaced to either side. It is clear that some of these crofts were superimposed on earlier arable fields. William de Waver was granted a market here in 1257 and this planned expansion may have been the result of this commercial activity. By 1332, however, there were only seven taxpayers.
10 Scheduling information.
11 Descheduled 17/04/2001.
12 The English Heritage statement for the reason for descheduling noted that the earthworks of the site were reported to have almost completely disappeared by 1959, that intensive arable cultivation took place until 1967,that the moated site nearby was destroyed in the 1970s and that field drains, grass resowing, telegraph poles and a piped water supply have all contributed to the continuing destruction of the site with no surviving archaeological deposits from archaeological investigation relating to these works.
In summary English Heritage considered all archaeological remains to have been destroyed by continuing arable cultivation and that the site should no longer be considered of national importance.
13 Despite the site being de-scheduled due to ‘total’ destruction the HER lidar layer shows that it is still tolerably well preserved, despite ploughing, and that the decision to de-schedule may have been made without all of the facts. The earthworks are good enough to improve on Bond’s plan of the settlement (note 7), often re-produced in articles on Medieval village plans. A small triangular widening of the main street, just south of the moat (which can also be seen) could even be the market place for the market granted to either here or Churchover in 1257.