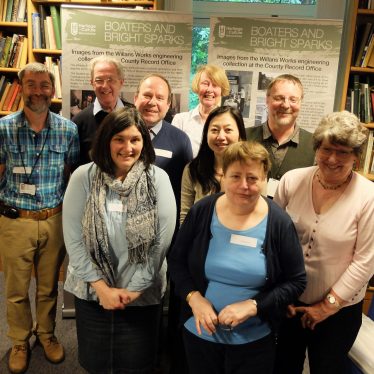 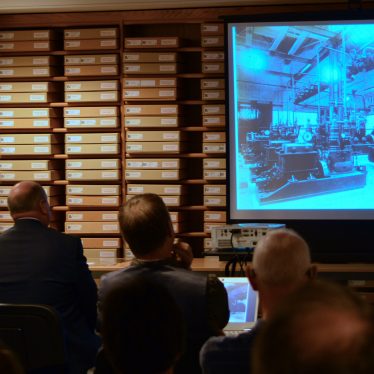 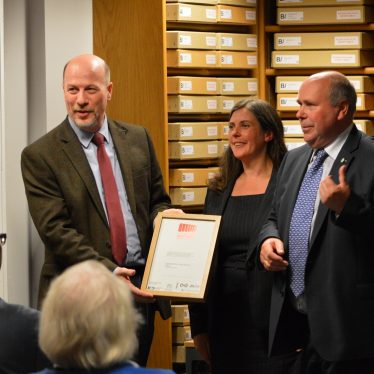 The Willans Works archives project at the Warwickshire County Record Office is coming to an end later this month, but work on the records of the engineering site at Rugby will continue thanks to the team of volunteers helping out with the project.

The major funding came from the National Cataloguing Grants Scheme and National Manuscripts Conservation Trust and representatives from both were at a County Record Office event held on 4 June to promote the project. Speakers included project archivist Gary Collins and project conservator Kaori Hilton; volunteers; and archivists working on related collections held elsewhere.

The volunteers included Alain Foote, who spoke about the history of the Willans Works site, which he knows very well, having worked there for many years as an employee of GEC and Alstom (the current occupants).  Pauline Pedersen then talked about a Willans & Robinson workmen’s register covering the period 1898 – 1902 and the wealth of information she has extracted from it. This includes data on the various trades of people working there, where they came from to work for Willans, who they used to work for, the reasons why they left the site, the weekly pay rates they received, and other useful facts that can be used by researchers.

Heather Cadbury and Janet Carciofo told the audience about their painstaking work in putting back together broken glass plate negatives produced by the Willans Works’ photo department. They also helped to re-package the plates. One of the points they made was that the photographs covered the whole range of activity at Rugby – photographs of the works and its various production bays; engines, turbines, and other parts; staff; and social events such as children’s Christmas parties, dinners, dances, presentations, and open days.

Peter Coulls and John Willock then spoke about their work on photographs and glass plate negatives. Peter explained that they have been using photo department log books to identify material. He showed photographs taken at the original Willans & Robinson site at Thames Ditton in Surrey, which is where the company started in 1880 before moving to Rugby in 1897. John then talked about turbines built for Frank Whittle’s test work on the jet engine in the 1940s and equipment manufactured for power stations in the USSR. John also mentioned some of the work he has carried out with Alain on items built by Willans for the government and Armed Forces during the First World War.

Putting the Willan Works into context

The other two speakers were able to put the Willans Works into context as they talked about the archives of other companies that had links with the Rugby site. Charlotte Burgess spoke about the large GEC Traction collection at the National Railway Museum and Michael Hughes gave an insight into the Marconi records at The Bodleian Library in Oxford.

After the event The National Archives Chief Executive & Keeper Jeff James presented the Archive Service Accreditation award to the Record Office in recognition of it meeting the UK standard for archive services. Warwickshire is one of only 26 archives services so far that has been awarded accreditation. It was fitting that he did the honours as he is an ex-Royal Navy engineer and served on at least one submarine that was fitted out with equipment from the Willans Works.

Linkedin
More from Libraries and Archives