The West Window That Might Have Been. St Michael's Church, Whichford 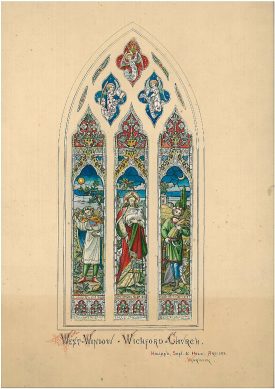 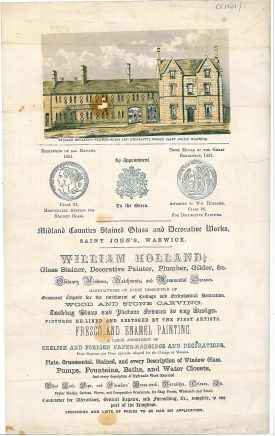 The Victorian stained glass of the west window of St Michael’s Church, Whichford is a beautiful example of the craftsmanship of the time.  However, an altogether different design had been previously created1 for the window by local craftsman, William Holland.

William Holland’s fame in the art and production of stained glass reached far beyond the boundaries of Warwickshire. Commissions were received from churches from many other counties in England and also from Wales and Ireland. Examples of many of these designs are held here in the Warwickshire County Record Office. Many designs for churches within Warwickshire have also survived and may be viewed.

The poster shows the business premises set up by Holland in 1847 in Priory Road, Warwick after moving from premises at the lower end of Smith Street (1832-1847). A residence for himself was also built on the new site, and by 1851 he was living there with his family. By this date, 26 men were employed at the works. An entry in a local directory dated 1850 gave the following description:

..an extensive stained glass and decorative painting establishment… where every description of design for monumental and baronial windows, enamelled and encaustic painting, gilding, imitations of wood, etc are executed.

Holland retired in 1873 and the business was taken over by his son Thomas in association with Frank Holt. In 1911 the business was moved to new premises across to the other side of Priory Road.

This article was Document of the Month for the Warwickshire County Record Office in April 2009.  Further articles can be found on their website.

Linkedin
More from Whichford
More from Church Of England: Interiors