You are here: Home>Locations>Berkswell>The Berkswell 'Cello 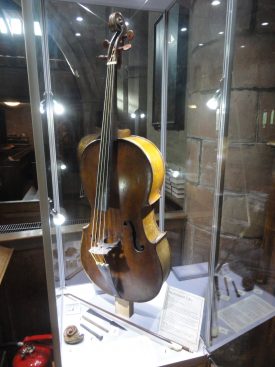 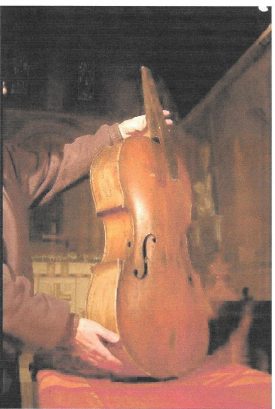 The Bekswell 'Cello as found before restoration - note hole in side, front coming off, no neck, scroll, bridge, etc.
Image supplied by Alastair Dymond 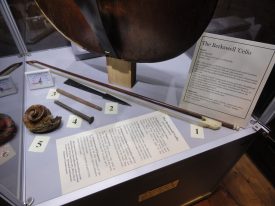 Artefacts including the original scroll etc. of the Berkswell 'Cello, now in display cabinet.
Image supplied by Alastair Dymond

The Berkswell ‘Cello is labelled and dated by the maker: John Barrett at the Harp and Crown in
Pickadilly, London 1720.†The ‘cello is listed in the Berkswell Church Warden accounts in 1794, … ‘paid in part towards the *Basevial for the use of Church… £1-8s-6d’.1

By 1794 the ‘cello was very much second hand at 74 years old. A musicians’ gallery2 was erected at the West end of the church in 17773. This gallery accommodated a church band and quire that formed part of the ‘West Gallery’ tradition of music for psalmody and hymnody in Anglican Churches at the time.

Nine pews were allocated to parishioners, and paid for, in the gallery in 1778 and three were left for ‘ye singers’4. The gallery was dismantled in 1896 to make way for the installation of a new Willis organ that was blessed at a special service in 1897.

Old church instruments, such as the Berkswell ‘Cello, were ‘retired’ and fell into disuse. The ‘cello was held at Warwick Museum in its oak case5 for part of the 20th Century and then later in the Berkswell Museum of local history, which sadly closed in 2016 .

The Berkswell Museum Committee considered the challenges for the ‘cello’s restoration in 2007 when they were approached by Chris Egerton, a postgraduate student of stringed-instrument conservation at the Royal College of Art and the Victoria and Albert Museum. He prepared a ‘Condition Report, and Treatment Proposals’ that included photographs of the inside, acquired using a miniature camera, as well as suggestions for future display and interpretation.

The ‘cello was in a very fragile and unstable condition with many missing parts and severe woodworm damage throughout. The committee decided on conservation and restoration to preserve the instrument for future generations.

The instrument was restored to ‘display’ standards rather than ‘to play’ standards, which would have compromised its many original 18th century features.

In 2017 the ‘cello was returned to where it was last used in Berkswell Church 120 years ago. Thanks to a generous memorial donation a special exhibition cabinet was obtained to house the ‘cello and several associated objects. These include a replica 18th century bow and some important fragments discovered during the conservation process.

This article was originally published in the Berkswell Parish Magazine, and is reproduced with the permission of the author.

2. 6 March 1777: Vestry Meeting approved a scheme to build a gallery at the West end of the church

3. 24 August 1777: Robert Hester gave the Churchwardens a receipt for £47-0s-0d, being payment in full …‘for building a Gallery in the Parish Church of Berkswell this present year’.

4. In 1778, nine pews in the Gallery were allocated and paid for; three were left for ‘ye singers’.

† Also written in ink on the original label, the name of a local repairer: ‘J Thompson, Berkswell, 1790’

* Basevial or Bass viol is an 18th Century name for a ‘cello or violoncello.