You are here: Home>Locations>Warwick>"A Strange Sight Seen in the Sky This Night", 1715 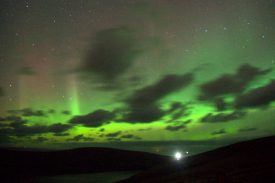 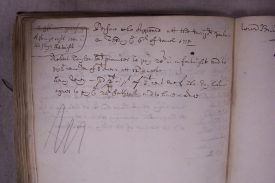 It’s funny the things you find when looking for something else.

A regular visitor to the Warwickshire County Record Office (name withheld to protect the guilty) drew our attention to a little note in the corner of a Warwick Corporation Order Book (reference CR1618/W21/3) he was reading for his own research. On the 6th March 1715, there was a “strange sight seen in the sky on this night.”

What could it be?

So this naturally piqued our curiosity. What could it be? Fortunately, the modern world makes such a quest somewhat easier than it may have been in days gone by, as information came readily to hand via this world wide web of ours. It turns out that the strange sight in the sky was an auroral outburst that encompassed not just Warwickshire, but the whole of Europe (see Beech 1994: 52). Even better, it transpires that noted astronomer Edmond Halley (most famous now for the comet that bears his name) wrote about not just his observations of the event, but suggested possible causes. This paper was published by the Royal Society, and is available from their website.

The edges whereof were ringed with a reddish yellow, like as if the Moon had been hid behind it, there arose very long, luminous rays or streaks perpendicular to the Horizon, some of which seemed nearly to ascend to the Zenith.

The lights bent and stretched, and Halley further describes how they formed into yellow ‘clouds’ against the black sky, before disappearing suddenly, “as if a curtain had been drawn over them.” The lights continue, sometimes seeming “to undulate and sparkle”, and Halley himself watches until three in the morning.

Halley struggles to reach a conclusion as to the cause of this phenomenon, and considers hypotheses that see the aurora potentially created by ‘magnetic atoms’ and ‘vapours’. He is uncomfortable deciding that this is the actual cause of the lights, as they always appear in the North. Eventually, he reaches no conclusion as to the aurora’s origin, and suggests the best way to finding their cause is to watch closely should the lights reappear in the future.

A passing comment, then, in a seemingly unrelated volume, offers an insight into a natural event of some note; an event that must have filled the people of Warwickshire with something akin to fear, wonder and confusion.