You are here: Home>Locations>Stockton>Saving the Small Blue Butterfly 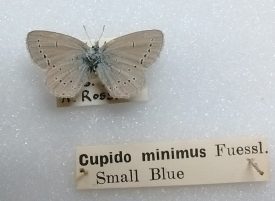 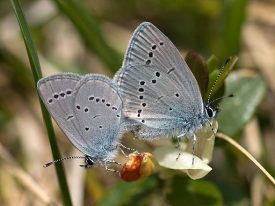 Small Blue in its native habitat
Photograph courtesy of OhWeh

When I was younger my family frequently went on day trips down to Lulworth Cove, and I remember my Dad pointing out some very small, blue butterflies that would occasionally rise from the grasses and chalky meadows. Little did I know that these beautiful, little, blue winged creatures were at risk, and little did I know that a number of conservation projects were being carried out in my local Warwickshire to save them.

The Small Blue, or Cupido Minimus, is the smallest butterfly native to the UK, growing to no more than 3cm across. Whilst the female is of a dark brown colour and not particularly striking to the untrained eye, the male has a glossy black colour with a dusting of shiny blue scales which demonstrates where they got their name. They are typically found in dry, chalk-based, sheltered grasslands near their main food-plant, the Kidney Vetch. These sites occur naturally along coastal grasslands and dunes, and in man-made areas such as quarries, gravel pits and road embankments. The Small Blue live in small colonies, but are now considered a priority species for conservation efforts due to a loss of habitat.

The Small Blue in Warwickshire

The species had been lost across a number of Warwickshire sites, but thanks to conservation programmes the Small Blue has begun to flourish and occupy increasing numbers of areas across the county. Their primary viewing location is at Southam Quarry, and they can mainly be spotted during the months of May through July. They can also be found at Rugby Cement Works, Ufton Fields, Stockton Cutting and Bishops Hill, amongst a handful of other sites.

Various conservation projects have been undertaken around the county with the aims of restoring lost habitats, providing advice and guidance to local landowners, monitoring and evaluating the selected sites, and consequently increasing the population size and distribution of the Small Blue. With reasonable successes it is hoped that locals will be able to see the Small Blue returning to the county and experience their small yet mighty beauty.