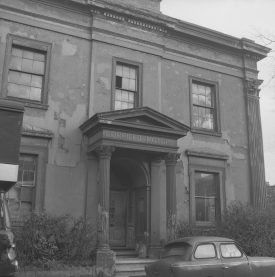 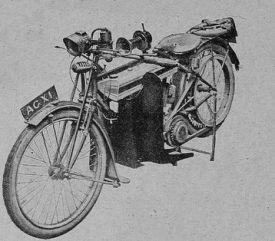 The Forfield combined front guard and footboard on a Triumph motorcycle.
Picture part of an article in 'Motor Cycle' February 12th 1920, page 180.

Henry James Stretton-Ward was born in Coventry in 1895. He was the son of James Ward (a lodging house keeper) and Florence Rose Squirrell (the eldest daughter of the Rev. Christopher Squirrell), thus making him the Reverend Squirrell’s grandson.

In 1912, after a private education, Henry joined the Great Northern Railway in the chief engineer’s office at King’s Cross, London. He was with the GNR when the First World War started and tried on several occasions to join the armed forces. However, on each occasion he was refused due to being medically unfit.

He still managed to serve his country however, when in 1915 he left the railway and moved to Coventry to take up a position at the Premier Cycle Company as a motorcycle tester for the War Office. This was a position he also held after a move to the Triumph Motor Cycle Company.

1919 was a momentous year for Henry, as not only did he get married but this was also the year he left the Triumph to set up his own business as a motor cycle engineer. He set up Forfield Motors in the former stables of Warneford House , joining his mother, aunt and grandparents who were living at Warneford House at the time.

His three great passions were veteran motorcycles, having organised Leamington’s first motorcycle club, early cinematography and steam locomotives. Sadly, increasing ill health meant he had to give up active involvement with the first two but remained Hon. Secretary of the Railway Correspondence and Travel Society up to his death. This was a position he had held for 25 years.

Henry passed away at Gower House, 11 Radford Road on 28th May 1958 and was cremated at Canley crematorium.