You are here: Home>Locations>Warwick>Healey Marine: From Cars to Boats

Healey Marine: From Cars to Boats 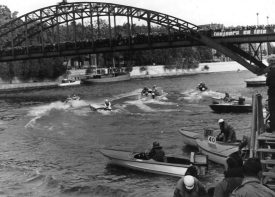 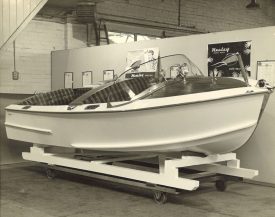 The Donald Healey Motor Company archive at Warwickshire County Record Office doesn’t just include material on cars. There are also items relating to other interests the Healey company and family pursued, such as boat building and power generation using wind power. The records also show how these ‘adventures’ played out.

The title of one of the chapters in Donald Healey’s autobiography My World of Cars (published by Patrick Stephens Ltd in 1989) suggests that he thought the boat building was not a success – ‘the cobbler should stick to his last’. In other words, stick to what you know.

He was looking back on the idea for the company to branch out into building boats in the mid-1950s. He was a keen water-skier (as was racing driver Stirling Moss) and the story he tells is that he returned from water-skiing in Nassau in 1955 and was looking for something to do so convinced the company that speedboats were an area to get involved in.

The first Healey Ski-Master was built at Bridport in Devon and the model sold reasonably well with many being exported to the United States. Production for the next model was transferred to the company’s Cape Works in Warwick and was called the Healey Sprite (the same name was used for the sports car produced by Austin-Healey from 1958 until 1971). A new subsidiary company Healey Marine was set up to concentrate on larger boats with an inboard (rather than an outboard) engine. Donald’s son Brian (known as ‘Bic’), who was responsible for marketing for the motor company, was put in charge (allegedly on the basis that he had been in the navy during the Second World War).

Bic came to an arrangement with Lord Aylesford of Packington Hall (near Coventry) to use one of the lakes on the estate for testing boats. Family members were frequently there at weekends for boat testing and water-skiing. A pond at The Cape Works was also used to test that boats could float. Production was eventually transferred to Yorkshire.

Inevitably, because of Donald’s competitive nature, Healey boats were entering races and he and Bic often drove them in events. Donald was involved in the 1958 24-hour race at Aix-Les-Bains in France (with motor racing driver Tommy Wisdom). They won the trophy for the best-placed British crew. Another event was the Six Heures de Paris race which took place on the river Seine at the same time as the Paris Salon motor show. This time Bic was co-driver with Tommy Wisdom and although their boat performed well, it broke down.

The company switched from wood to fibre glass for the hulls and a chance meeting with world speed record driver Donald Campbell (who went to Warwick to complain about the steering on his car) led to Bic being invited to a trial run for Campbell’s boat ‘Bluebird’ on Coniston Water. Two Healey boats were in the support team acting as rescue craft. Campbell was also managing director of Dowty Marine, and Bic got to be driven at high speed by Campbell in one of Dowty’s speedboats on the company’s test lake near Cirencester.

Healey eventually pulled out of boat building as more companies started building them, and because the company could not put the resources needed into the market. Staff were also overworked, especially Bic who was also still in charge of car sales.

As with Healey cars there are collectors, and the record office has received a few enquiries about the boat building side. Luckily no one brought along their Healey boat on a trailer to the Healey open day in September 2016 as there would probably not have been enough room in the car park, but one of the car owners does have a Dinky toy model of a Healey boat on a trailer.