You are here: Home>Locations>Bentley>Bentley Pound 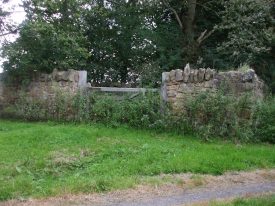 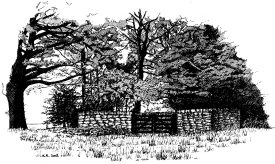 The Pound here at Bentley would have formed an integral part of the administration of the local affairs. It lies immediately adjacent to the common lands of the parish (beside School Farm), where the grazing and pannage (right to graze in the forest) would have been shared among all the members of the parish. A Manor Court, comprising a jury of 12 tenants, presided over by the Lord of the Manor, would have been held twice a year to ensure that good farming practice was observed and that law and order was maintained. A member of the parish held the office of pinder or pounder and it was his duty to drive straying stock out of the open fields and impound them here in the village pound, until claimed by their owners and the appropriate penalty paid.

Pounds such as this were essential adjuncts to the open fields that were unenclosed, with the growing crops prone to considerable damage by straying livestock. All the animals were the responsibility of their owners and were only released from the pound on payment of a fine. Occasionally it may have been necessary for an unclaimed animal to be cried or announced at the market in Atherstone, in the hope that the owner would come forward.

The feudal office of pinder or pound-keeper was a necessary but unpopular one; there can have been few volunteers for the post, which was often subject to abuse and occasional assault. Most medieval pounds were small fenced or hedged enclosures, though later stone or brick pounds such as this were often constructed on the sites of former medieval ones.

Stone was quarried in Bentley in the 19th century. The Pound has a small inscription carved into the stone of BILT 1846, although it is thought that the structure is much older than this. On July 14th 1850, R. Millington was paid 14 shillings for breaking stone on the common in Bentley and Allen Windridge was paid one shilling and sixpence a yard for raising 40 yards of stone and breaking in Monks Park Pitt. Bentley was a thirdborough (part) of the parish of Shustoke. The accounts of Samuel Bralson, Constable for the parish of Shustoke and Bentley on January 8th 1676, record that Richard Eaves was paid two shillings and sixpence for mending the stocks and pound, and later in the same year a further sixpence was paid for “mending the pinfold”. Stocks were often situated near the pound, as the Manor Court would have dealt with both civil and criminal offences.

Other pounds in the area

The pound at Shustoke stands on Shustoke Green, next to the Plough public house, and another pound stood in Merevale Lane until the late 1980s but was removed to allow for road-widening. The neighbouring parish of Over Whitacre recalls the site of its Pound in Pound Lane.

The Bentley Pound restoration project was initiated by the Atherstone Civic Society in 2001, and completed in 2003 as a result of funding donated by the Waste Recycling Group plc, administered by WREN under the Landfill Tax Credit Scheme. Thanks are also due to many other local individuals and organisations who have donated time and help to the project.