You are here: Home>Locations>Warwick>Site of undated well and post medieval wall at 38 Bridge End, Warwick. 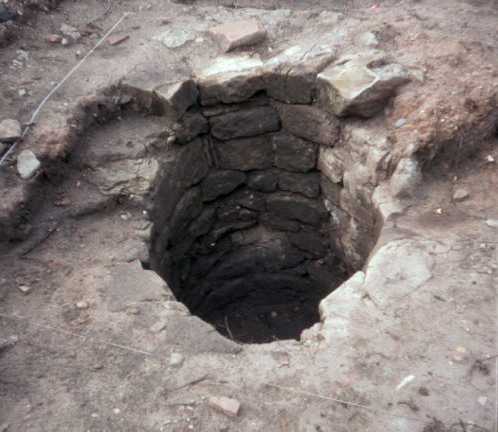 The site of an undated stone built well and post medieval wall. The well was discovered during an archaeological excavation at Park House, Bridge End, Warwick.

1 No remains of the Medieval suburb were found, the earliest (unstratified) finds date to the 17th century. The sandstone-lined well, although undated, may be the earliest feature on the site, possibly associated with the 17th century property. The well survived into the 20th century and is indicated by a P for pump on the Board of Health plan of 1851 and is also shown on the 1887 OS map.
The sandstone wall is probably the remains of an outbuilding shown on the Board of Health Map of 1851 which had been replaced by another outbuilding by 1887, although the latter building had been demolished by 1905. The original date of the building is unknown.